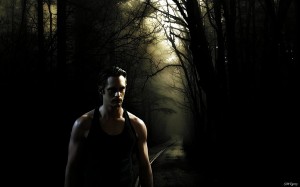 I had never heard of The Sookie Stackhouse series before I began watching True Blood.  I was intrigued by the series because of the posters plastered everywhere in NYC in the summer of 2008 advertising “Vampires Were People Too”.  So when the premiere came around I sat myself down and enjoyed an entertaining hour of television. That went on for a couple of weeks every Sunday until the fourth episode when my entertainment became an obsession.  That was the night I was introduced to the 1000 year old Viking vampire, Eric Northman.  Alexander Skarsgard’s portrayal of Eric has been a joy to watch.  From the very first time seeing him on his throne, commanding respect, to this past season seeing Eric’s vulnerability during his amnesia, we have been subjected to the most intriguing honorable character on HBO.

It has been a process for the fans to see the true character of Eric.  We have been subjected to little bits and pieces which we couldn’t trust fully because Eric always has his guard up.  In Season 1 Eric was made out to be the villain, but from that first meeting I got the feeling that I wasn’t privy to some kind of information that was important.  Skarsgard was able to give the impression that Eric needed to be feared but also someone who wasn’t all they seemed.  There was a wealth of emotion coming off of him that made me want to know who Eric was.  I wanted to understand why Eric was so respected.

It was in Season 2 the fans got to understand Eric from the beginning.  We met his maker, Godric, who in his own right is a very honorable character who commands loyalty and respect.  Through his relationship with Godric, we learned that Eric would do anything for the people he loves, even put himself in harms way to protect them.  Eric was taught everything by Godric.  He was taught to be a vampire and also to remember and respect who he was when he was human, which is a very important trait that makes Eric stand out among vampires.  As a vampire grows older, they lose their human sensibilities and most vampires give the impression that being human is beneath them.  Eric plays that card very well, until Season 3 when he finds his father’s Viking crown in vampire Russell Edginton’s menagerie and realizes that Russell massacred his family a millennium before.  For 1000 years Eric Northman has held a personal vendetta against the one who massacred his human family and he did everything he could to get back at Russell.  The emotions that crossed Skarsgard’s face as he looks upon his father’s crown for the first time in 1000 years was like watching the massacre happen right then.  The pure surprise, then hatred, then calculation Skarsgard conveyed in only a few seconds time gave the viewers the understanding that this is the reason he agreed to be turned into a vampire.  He needed to avenge his family’s honor.  He needed to give their death some sort of meaning because of how much he cared for them. 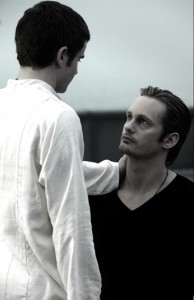 Season 3 was a very difficult time for Eric since he was still grieving the death of Godric.  For the first time, we see Eric not fully confident in his abilities and his emotions.  He has no anchor anymore and his progeny, Pam isn’t the grounding presence that Godric was.  Eric has let his emotions get the better of him and now he has to work through a strategy to stay alive.   Godric once said to Eric, “A vampire is never at the mercy of his emotions.  He dominates them.”  Since Godric’s death Eric hasn’t been able to dominate his emotions.  He is led by them. It was a very telling moment when Sookie bursts into his office and wants to know why she shouldn’t trust Bill.  Eric is sitting in his office knowing he might die very soon and it is a revelation to see him take that in.  Eric the confident, cocky vampire we all love, is now trying to make sense of his imminent death.  There is a desperation and a need to show Sookie who he really is for just a moment.   Eric has again put his life on the line for people he loves, this time Sookie.  Eric would never tell Sookie he loves her, he is too cool for that, but his actions are always done to protect her from others in the supernatural community who might want to take her powers away.

It was in Season 4 that we get to see the most vulnerable Eric.  Having been cast with amnesia from a witch’s spell all of Eric’s defenses have been knocked down and we get the true essence of who he is as a being.  I want to believe that this is what Godric saw on the battlefield that night 1000 years ago.  The true Eric is a scared young boy, who has a playful streak that is mixed with curiosity, wonder, a big heart and charm, but if provoked will push back the fear and fight for who he loves.  I know that Godric was the only person who got to see the true Eric, that is until Eric got his memories back.  As Eric’s memories flooded back to him it was amazing to watch Skarsgard convey that Eric was seeing and processing the man he was for the very first time.  Eric was able to see himself as he truly is and be confident in the vulnerability and fierceness he posesses in his soul.  When Eric talked to Sookie after getting his memories back there was a subtle shift in how Skarsgard played him.  It was the first time, we the fans really got to see the true Eric for ourselves.  He was still cool and collected but it was also the only time Eric put all the cards on the table and the shift that Alexander Skarsgard made in that scene was so minute, but we knew everything was riding on it. 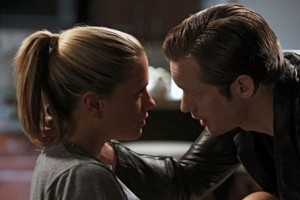 Eric Northman may be guarded and calculating, but it is to protect the people he cares for the most.  Over the millenium, Eric has learned to adapt, play, and survive the perils of the world.  He has also been very intelligent in setting himself around others that will protect him.  It is a mutual agreement which doesn’t come easily.  Eric doesn’t have many friends, but the ones he has, will follow him where ever he goes.  Over the past five seasons, we have seen the evolution of a vampire that has had his world crushed with the death of his maker, his reason for being rectified momentarily by the entombment of Russell Edgington in a concrete grave, his heart broken by a human with faerie blood and somehow Eric finds within himself something to keep living for.  It has been an honor watching Alexander Skarsgard find that spark within Eric that enjoys life and craves for more.  I can’t help but think that Godric would be proud.

We’ve updated out True Blood cast page with Eric as our first entry for True Blood! We’ll be adding to it as the weeks roll on and we hope to focus in on all of the main characters eventually. Waiting sucks, I know!