You are thinking, what’s this? Well ENTRE NOS is a title we have mentioned often in our monthly “What’s On” posting and if you watch HBO Latino you certainly are familiar with the title. ENTRE NOS is a long-standing stand-up comedy show. Think of HBO HALF-HOUR COMEDY HOUR with Latino artists. Wel that show has had a little competition going and the winners of the stand-up contest are showcased in ENTRE NOS: THE WINNERS. It debuted on HBO Latino channel on 06.19 and still can be found there, plus on HBO (formally HBONow) and HBO Max.

I mention it here because its debut was announced well after the June “What’s On” posting. Here is a portion of an HBO press release announcing the special. 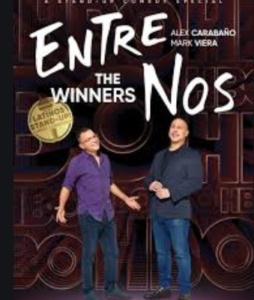 The winners of the “Latinos Stand-Up!” comedy competition – Mark Viera and Alex Carabaño – take center stage in this new edition of the stand-up comedy special. ENTRE NOS: THE WINNERS. It features the two comedians who won a stand-up comedy competition held in conjunction with the New York Latino Film Festival, with Viera and Carabaño coming out on top. In these sets, Viera talks about our smartphone life vs. “the beeper life” of his younger days, getting in trouble from innocent social media posts, and the “delete delete box,” while Carabaño shares anecdotes about being short, astrology and dating, and having a family that doubted his heterosexuality. Let these two winners win you over in this exclusive comedy special.

So, if you are a stand-up fan or just curious about what Latino comics and their audiences find funny check out the back-to-back routines from these chosen winners. Don’t’ speak the language? You do know that on both HBO (formally HBONow) and HBO Max, you can click on the Closed Caption button and read subtitles, right? But that is NOT the case here, as the accompanying clip shows, Viera & Carabaño are speaking English! Enjoy!