HBO pretty much holds the staple on developing amazing shows that stick with viewers years after their off the air. In the past decade, they’ve capitalized on this by taking famous shows and turning them into motion pictures as a way to give their audience another taste of the shows they love. The success of the Sex In The City movies (2008) was unparalleled, leading to two profitable sequels and a very happy fanbase. HBO is taking a leaf from the SATC book and making another famous show into a motion picture. The Entourage movie, a long awaited look into the crazy acting world we were all devastated to say goodbye to, will premiere on June 5, 2015. 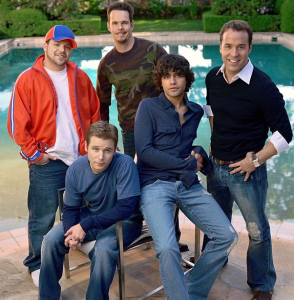 The very successful show ran from 2004 to 2011 and when it concluded, fans still felt like it was preemptive and the show should have ran longer. Following the career of Vince Chase (Adrian Grenier) and his band of rag tag friends, Entourage showed a surprisingly realistic and often crass view of the glamorous acting world and everything that comes along with it.

When we left the boys four years ago, Vince had just declared his love for Sofia, Ari had given up his career to be with his family, and E was officially back with Sloane after learning that she was pregnant with his child. The writers tied everything up with a nice pretty bow so I’m interested to see exactly what they’re going to do with the story during the movie.

Not much has been given away about the plot of the movie, though Mark Walberg has confirmed that its intention is to get back to the boys and their initially roots. The preview below seems to have everything we ever wanted in a spin off movie: all the boys we love, Llyod yelling for Ari, and witty dialogue. Check it out below and be sure to let us know just how excited you are for the movie in the comments!