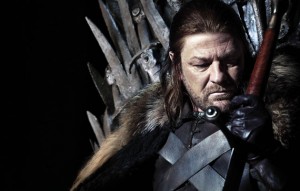 The thing you need to know about Eddard Stark is how honorable the man is. No, really. He is so honorable that he ended up dying because of it. With his death came an indelible sadness.

But let me tell you about how Eddard Stark lived. He was just, brave, dutiful, a seasoned soldier, a loving husband and father, a fair ruler and a loyal friend. That is how fans want to remember him. He lacked the phony airs that graced the court at King’s Landing. We were happy to see someone not sucking up or trying to back stab someone else to get ahead. Eddard Stark is the kind of guy you want for your friend and ally. He is skilled as a soldier, has a natural rapport with all of his banner men and has close, tight knit relationships with his children. He has a loving relationship with his wife, Catelyn Tully Stark, although the only thorn is the constant presence of Jon Snow, Ned’s ‘alleged’ illegitimate son.

Eddard wasn’t supposed to marry Catelyn Tully. His older brother, Brandon, was betrothed to her. His younger brother, Benjen, headed north to become a ranger of the Night’s Watch. Unfortunately, when you live in Westeros, sooner or later, there’ll come a time where one kingdom wages war against another or a rebellion starts up somewhere. As a banner man, you have to follow suit and march into war, defending your liege Lord. Brandon Stark, along with Lord Stark, was killed in a horrific battle against the mad King, Aerys II Targaryen. When Brandon died, Eddard became the eldest son and inherited the title of Warden of the North and Lord of Winterfell. With this new position and title being thrust upon him, the betrothal with House Tully remained and he did his duty and married Lady Catelyn Tully. Back then, marriages were arranged to solidify political allegiances and keep loyalty intact. I cannot imagine what it would be like to marry a total stranger, especially someone you didn’t love, but back then, marriage was pragmatic. Eddard and Catelyn grew to love each other and with time, added to their family by producing three sons and two daughters: Robb, Sansa, Arya, Bran and Rickon. 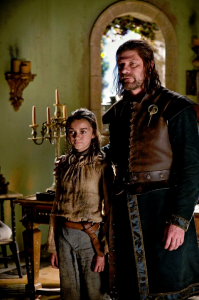 Eddard is a man who lives by an honorable code and carries out his responsibilities with dignity and respect. In the first season premiere, we see Ned carry out one of the many responsibilities – he must deal with a deserter from the Night’s Watch, and because he is the Warden of the North, not only does he decide what the sentence is, but he must also carry it out himself. Catelyn dislikes the fact that Ned brings Bran, their second youngest son along to witness the sentence and execution, but as Ned informs her, “He won’t be a child forever and winter is coming.”

The Stark motto: “Winter is coming.” Fans who’ve read the book and watched both seasons have heard those words repeated often enough to know that winter is a very deadly thing in the seven kingdoms. With winter comes harsh times, long spells of snow and ice, and if you are not prepared, almost certain death and destruction. The first sign that Ned should’ve paid more attention to was finding the dead dire wolf and the stag. The dire wolf is the sigil of House Stark. The stag, of House Baratheon. How ominous that the animals were dead. This was the first sign of the hidden danger that Ned was about to face. The second terrible event was when Bran was pushed from the window.

When Robert Baratheon came to Winterfell to ask Ned for a favor, it was to ask him to be Hand of the King. “I need you Ned, you’re a loyal friend. Understand? Loyal.” Robert Baratheon had two brothers, Renly and Stannis, whom he could’ve asked to be Hand of the King, but he chose Ned. Loyalty, it seems, is a rare quality, especially in King’s Landing. It’s no wonder that Robert asked Ned, because when fans got a glimpse at all the back stabbing, lying sycophants in King’s Landing, it almost makes your head spin and your stomach twist with knots. 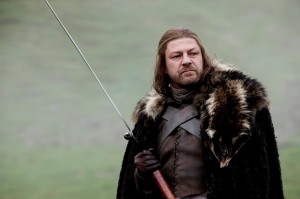 A sense of unease fills Ned, as he doesn’t know who to trust or who to turn to. There is no honor amongst of thieves and that’s exactly the kind of people he is surrounded by: Grand Master Pycelle, Lord Baelish, Queen Cersei and Jaime Lannister. His predecessor, John Arryn, died by a fever but upon closer research, Ned finds that it wasn’t a fever, it was poison. The man who actually helps Ned out is the one person you’d least suspect, Lord Varys. He’s not called the ‘Master of Whispers’ for nothing. Varys informed Ned that asking too many questions puts him in a very dangerous position. Before you knew it Ned found out the real reason why John Arryn was murdered, because he knew something terrible about the ‘Baratheon’ children: they were the product of an incestual relationship between the Queen and her brother, Jaime.

Sansa, who is being groomed to become Joffrey’s fiancée, wants to stay in King’s Landing. Arya, who is more like her father, wants to leave and go back home. Ned had a real go of it, trying to balance his duties as Hand of the King, looking after his daughters and trying to decide what the next move was, especially when Robert was severely injured and died after a hunting accident. Robert, why didn’t you just stay back and not go hunting that day?! Ned, why didn’t you gather your girls up and head back for the safety of Winterfell?! I think those two questions were on every fan’s lips, especially when we watching Season I, episode eight and nine. 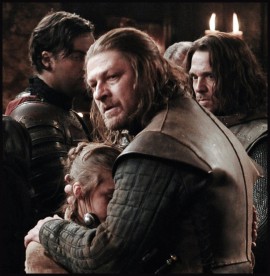 Nothing could prepare us for the betrayal and treachery that Ned would face, all at the hands of that awful monster – Joffrey Baratheon. Oh wait, I forgot about Cersei – after all, she was responsible for getting rid of Barristan Selmy and telling Ned that his piece of paper wasn’t going to save him or ensure his position as Protector of the Realm. And let’s not forget Lord Baelish, who I have come to despise with great passion – after all, if Baelish can profit one way or another, especially in a crisis, yes, he’ll help out to serve his own interests. In the end, Ned was tossed into a dark dungeon cell, with nobody to come to his aid. Sansa pleaded with Joffrey to let her father go to the Wall, at least he would still be alive. Alas, it was not meant to be and fans were outraged, angry and sad to see Ned being executed.

After my tears subsided, I thought that no matter what happened to Eddard Stark, that bastard Joffrey and his psycho mother Cersei would never possess two things that Eddard had while he lived and would carry with him in the afterlife: integrity and honor.

Catch up on all of our other Game of Thrones character features on our cast page.