Boardwalk Empire season 2 doesn’t premiere until this Sunday night at 9PM but thousands of critics across the country (including yours truly) have seen the first few moments of the show and are now reporting back with near universal praise for the new season. 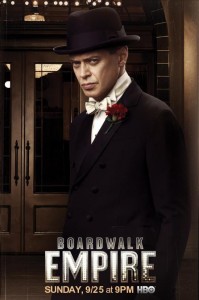 Here are just a few snippets of reaction from various publications:

“Sardonic and humble, as expected; but if anything, Boardwalk is a fusion of style and substance, and a revelation of Buscemi’s considerable gifts for sly comedy, for pathos, and even gravitas. He’s an authoritative presence without overplaying the muscle, a master politician.” –  The Montreal Gazette

“The show’s lavish sets and period costumes are worth their weight in Canadian bootleg whiskey, but the true draw of “Boardwalk Empire” is its expertly crafted characters, every one of whom spends their few sober hours each day plotting, conniving and watching their backs. From to its unexpected, but totally engrossing, cast of characters (we’re continually impressed by Jack Huston’s haunting portrayal of a man with half a face) to its cinematic action sequences, “Boardwalk” remains a top shelf series.” – MetroMix

“If you’re worried about Boardwalk Empire’s second season and wondering whether or not it can live up to the first, don’t bother.  This season keeps up the pace, doubles down and throws in a little humor for spice.  You won’t be disappointed.” – HBOWatch

“The story of Prohibition-era Atlantic City has an obvious appeal for fans who are still pining for The Sopranos (Emmy Award-winning writer and producer Terence Winter was involved with both shows), but it’s starting to find its own niche too – and this could be the season that it truly rises to prominence.” – Culture Mob

Season 2 of Boardwalk Empire begins this Sunday night at 9PM on HBO.  Don’t forget to set your DVRs because you will not want to miss the kickoff of an amazing season to come!
Check out some of the character shots released today on the official Boardwalk Empire Facebook page!