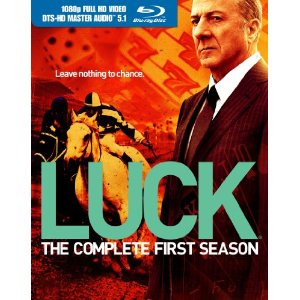 After the shocking cancellation of HBO’s horse racing series, Luck fans may find solace in the fact that soon they’ll be able to own the critically acclaimed series on DVD and Blu-Ray this November 27th. Starring several well-known actors including Dustin Hoffman and Nick Nolte, the series was directed by Michael Mann.

The 4-disc set will feature all nine episodes in 1080p but exact details of the special features have not been disclosed yet. Do you still want to watch this first season even though you know new seasons will most likely never be created? Can you stand the cliffhangers? Pre-Order Luck on DVD or Blu Ray today.

Feel free to comment below with your thoughts on the series, its cancellation and the possibility of the series returning to HBO. We’d love to get your thoughts.