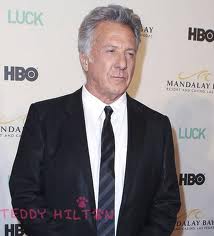 HBO’s LUCK has come and gone. The series, as everyone knows here, was cancelled after one season after the death of horses occurred on more than one occasion and later animal cruelty charges were made. Many involved in the series stayed silent and let the chips fall as they may. One such performer was Dustin Hoffman who played Chester ”Ace” Bernstein.

Finally, to a number of media outlets but mainly Fox News, Mr. Hoffman has had brief comments when asked about the series. He said –

[box]”They closed us down like a guillotine. The facts were so distorted that it frightened HBO into making that hasty decision. It really was a freak accident … But I was so glad I had done it (television). And I would do it again.”[/box]

[box]“My son and I had just finished a scene, we went to have lunch, and we got a phone call during lunch that HBO cancelled us. I thought it meant we were not going for a third season. They said, ‘No, now.’ We didn’t even go back to work that day.”[/box]

Lastly he feels that –

[box]“It was collaboration between PETA and TMZ. It’s interesting, sites like TMZ, they’re mistaken for news. We did All the President’s Men and you had to have two sources and they don’t need any sources, they’re gossip, but the general public believes what they say. [As for PETA they were]  “looking to get contributions Somebody ought to do a movie about them.”[/box]

I guess you can say he was disappointed that LUCK came to a quick end.