HBO has confirmed the debut date for ANIMALS, with the animated adult comedy series set to launch its ten-episode season FRIDAY, FEBRUARY 05 at 11:30pm exclusively on HBO. The half hour series will feature a trove of critters full of salty language and adult observations about the hard life faced in the big city. HBOWatch first brought the series to light in a post back in June. Here is a replay of the only clip we have so far.

Created by Phil Matarese & Mike Luciano and produced by Duplass Brothers Television, ANIMALS focuses on the downtrodden creatures native to Earth’s least habitable environment: New York City. Whether it’s lovelorn rats, gender-questioning pigeons or aging bedbugs in the midst of a midlife crisis, the awkward small talk, moral ambiguity and existential woes of non-human urbanites prove startlingly similar to our own. It is unknown at this time if the rats and others have actual names and personalities we can identify or if they are just random vermin of the alleyways and rooftops. It is also unclear of whether there is an actual storyline to follow or the show runs as a series of vignettes, themed or no, as is witnessed in the provided clip. All that will become clear in February. 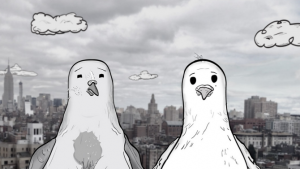 So, there is nothing wrong with adult animation, right? One interesting programming note about ANIMALS is that it is a late night show. On Friday night REAL TIME WITH BILL MAHER has the last primetime spot at 10:00pm. ANIMALS, however does not air until 11:30pm so, the question is, what airs at the 11:00pm time slot? It is speculated it might be Season Four of VICE. At any rate, Late Night is shaping up to show other content besides REAL SEX and CATHOUSE repeats. We will certainly review the debut episodes of ANIMALS upon airing on 02.05.

The series, of course is not the only content Jay and Mark Duplass have going at HBO as they also run TOGETHERNESS. That series is repeating its Season One run now on HBO and a new season is slated to join GIRLS debuting 02.21.16.