Aw, man! I like what Drew Michael is doing but it isn’t standup comedy; at least in my opinion. I mean when a gig only hears chuckles the first 36 minutes in something’s not cool. (At that 36-minute mark we hear big laughter over his dislike of Jimmy Fallon.) Sorry, dude; Drew, not Jimmy. But, then, who am I?

I still disconnect with this for the same reasons I did with Michael’s first special in 2018. Drew clearly has something important to say but not much ‘funny’ to say. For one, and I say this delicately, his depressive language and self-hate aren’t conducive for building laughs. I have seen gigs from comedians right here on HBO who have mental issues and lifetime therapy and they achieved ‘funny’. But Drew spends more time wallowing, kicking the floor and staring at that floor far too much for me. And I’m not the only one who didn’t feel humorous with his stint. There was one guy at one of those little tables around the stage that had little emotion registered on his face the whole time and the camera couldn’t miss him. 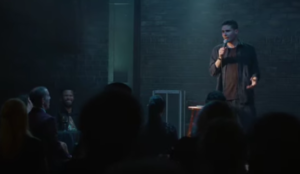 However, I am not out to trash Drew Michael, believe it or not. As a performance artist or a monologist worth listening to, like the noted Spaulding Gray and Eric Bogosian, Michael would fit in perfectly. That’s because what he has to say is worth it. He illustrates adeptly how a child can quickly turn into a troubled soul fighting for validation, love and understanding and how crippling it can be far into adult life to be without them. In his broken way, he still causes you to lean in and listen to every word. I would think that if I were there live, viable energy and/or tension would surely be felt. Maybe, that audience member that I called out felt it. Drew Michael is open and exposed, by his own device, and he controls it as best he can.

The one-hour stint ends with a big twist, just like his first special did. Two twists actually. First, one was his final joke. The audience both live and the ones at home expected a classic well-executed joke as the closer. And Drew wanted it to be so perfect he got out his phone to read it. He starts….”Why did the chicken cross the road?” And the punchline just makes your jaw drop! I won’t reveal it here but I’ll say for this joke the ‘chicken’ isn’t the usual bird but “a coward.” And that joke sums it all up.

The other twist shows us, as the cameras pan out at the end, that what appeared to be an intimate setting for 200-ish was actu 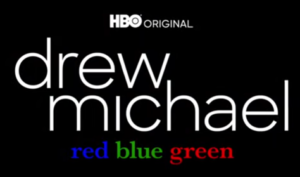 ally a larger space complete with a balcony seating a few hundred more than that. Wow, a lot of people came out to take in Drew Michael; good for him. At some point in the show, he stated an interesting point. The gist of it was that “perhaps you don’t care for this, perhaps you don’t like me and/or my act…but then again who are you?” This translates into the following – “This is who I am and this is what I do, and in the end, you are no better than I am. Just deal with it.” I’m no expert but I’d think that would be something a troubled person would say to remind themselves that they are just a good a person as anyone else.