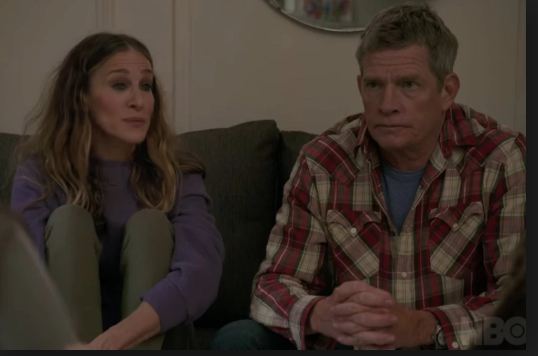 Not much is known about DIVORCE’s third season yet but all should fall into place real soon as the series is about to debut round three on MONDAY, JULY 02, 2019. Back in November of last year we got word that the series was going to return but we had no idea just when. It has been on different times of the year and for the third time around it lands in summer for six episodes. A trailer has dropped to tell us what to expect and what is great about it is that the tone in the voices here is just spot on. Watch and you’ll get what I mean.

This just reminds us that there is still some semblance of a family even though the parents are divorced and that those family moments can indeed be awkward. It also tells us that the family dynamic is still a part of the DIVORCE story.

How will Frances & Robert (Sarah Jessica Parker & Thomas Haden Church) continue to move forward in their relationships with their new loves and their kids, Lia & Tom (Sterling Jerins & Charlie Kilgore)?  Also, adding dynamics to their story, mostly of the comedic kind, don’t forget Molly Shannon’s Diane, Tracey Letts’ Nick and Talia Balsam’s Dallas. Adding to this cast in Season Three will be Dominic Fumusa (The Purge, Nurse Jackie) who will play a character named Jeremy who will be an assistant coach to the women’s basketball team Robert coaches. Also, James Lesure (TV’s Good Girls, Salvation) is said to be a potential love interest for Frances this season.

We are promised by HBO that we will see Frances and her ex-husband encounter surprises that spin their post-divorce lives in unexpected directions. After all, don’t forget that at the end of Season Two Robert told Frances that he got engaged to Jackie (Becki Newton). So, there we go. Are you looking forward to the continued story of Frances & Robert come 07.02.19?