Some kind of buzz has been generated for just about every HBO program out there but not much ever surfaced about DIVORCE starring Sarah Jessica Parker and Thomas Haden Church. That is until now, though there is still not much to say. We now know that Season Three of the series is a go. There is not much news, however, announcing that fact. HBO itself has not even issued an official press release regarding, at least not as of yet.

If you follow the dramedy you know that Season One had us witness the falling out and divorce of Robert (Church) and Frances (Parker) DuFresne. Exactly how the marriage fell apart played out in ten episodes. It debuted on Sunday, October 09 2016. Season Two surfaced on January 14, 2018. It played out for eight episodes. In that season it was the aftermath; Frances and Robert learned to rebuild their lives independently, even as they stayed entangled through their kids and mutual friends. What comes next?

Well, that third season is coming in 2019. However, it will be only six episodes long. Perhaps it will be the last season of DIVORCE? Perhaps Parker felt that she was going to cover all she needed to know about divorce, a subject she chose to explore because she knew nothing like it, in twenty-four episodes?

According to EW, there are a couple changes coming to the show the third time around. Co-executive producer Liz Tuccillo has been promoted to showrunner and 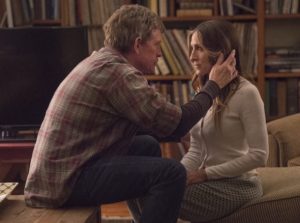 DIVORCE goes in front of the cameras sometime early in 2019, but since it is for only six episodes there is the likelihood we will see it air before year’s end. How will Frances & Robert move forward? We will have to wait and see, but at least we will get that opportunity.