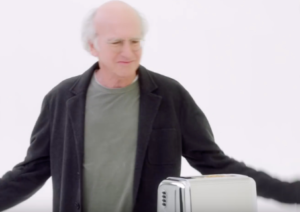 We have been waiting since the end of Season Nine in December of 2017 for some more of Larry David’s brand of humor and we are finally getting close. He has certainly been testing us for how long we were curbing that enthusiasm we have for CURB YOUR ENTHUSIASM. Anything we get is a treat, even a brief tease.

Production on the upcoming season kicked off in October 2018, and most of the familiar cast is expected back: Susie Essman, J.B. Smoove, Cheryl Hines and Jeff Garlin. (Bob Einstein, who had a recurring role as Larry’s friend, neighbor and sometime foe Marty Funkhouser, died Jan. 2 of this year). Debuting on HBO in 2001 and presenting 90 episodes to date, CURB YOUR ENTHUSIASM stars Seinfeld co-creator David as an over-the-top version of himself in an unsparing but tongue-in-cheek depiction of his fictionalized life.

Pulling from a press releasetwo years ago is this –

“We are thrilled that Larry will be back with his uniquely acerbic wit and comedic sensibility,” said Bloys.

Adds Larry David, “As I’ve said many times when one has the opportunity to annoy someone, one should do so.”

And less we forget, here is that Season 10 Tease:

Get it? Us waiting around for CURB YOUR ENTHUSIASM somehow equates to Larry David waiting for the toast to pop up. If he only knew. Now the only thing missing here is the exact date the new season premieres. All we know is that it will pop up sometime in January 2020. Come on Larry, you’re killing us.