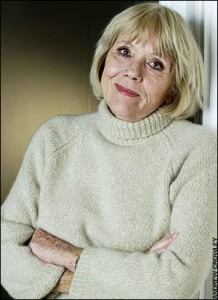 HBOWatch has just received an interesting casting rumor for the third season of Game of Thrones. According to Daily Mail, Diana Rigg has been chosen to play Margaery Tyrell’s wise and cunning grandmother, Olenna Redwyne. Better known as The Queen of Thorns for her quick wit and sharp tongue, Redwyne will serve as a semi-regular character in the upcoming season. This news hasn’t been officially confirmed by HBO or any other publication yet, but the guys over at WinterIsComing.net did report that Rigg was visiting the area where Game of Thrones is currently being filmed. Even though it’s still a rumor, I would that say that it’s a fairly safe assumption that Diana Rigg will indeed play The Queen of Thorns in Season Three.

The 73-year old Diana Rigg has appeared in numerous television series, movies, and theatre productions since the early 1960’s. She’s probably best known for playing Tracy Bond in the 1969 James Bond film On Her Majesty’s Secret Service; and for her portrayal of secret agent Emma Peel in the 1960’s British-television series The Avengers. Currently, she’s scheduled to appear with her daughter in a specially written episode of Doctor Who in Series 7. In 1988 Rigg was made a Commander of the Order of the British Empire (CBE) and a Dame Commander of the Order of the British Empire (DBE) in 1994. She was also considered a sex symbol during the 1960’s and an icon for feminism.

I’m excited to see how Game of Thrones adapts this character onto the screen. In A Storm of Swords, she is master manipulator, arriving in King’s Landing and giving the Lannisters something they didn’t bargain for. Additionally, she serves as a close ally to our little bird, Sansa Stark. Here’s a little background on the character from A Wiki of Ice And Fire:

“Olenna Redwyne is the mother of Lord Mace Tyrell, widow of the late Lord Luthor Tyrell. She is old, with white hair and very small. She is older than Hoster Tully (Catelyn’s father) … She is described as a wizened, cunning old woman with a wicked wit and a sharp tongue. In her youth she almost married a member of House Targaryen, but Olenna did everything she could to make sure it never came to fruition. Lady Olenna came to King’s Landing to attend the wedding of her granddaughter, Margaery Tyrell, to King Joffrey I.”

Author’s Note: Sorry guys, it doesn’t look like Maggie Smith or Judi Dench will be playing Lady Redwyne. I’m not very familiar with this actress, but apparently her sharp tongue and prickly nature are well known. The production team for Game of Thrones has always made excellent casting choices so I have no doubt that Rigg will be an excellent Queen of Thorns. More announcements about Season Three are expected to be made tomorrow (Friday) at Comic-Con. We will be keeping up with all the news and posting it here throughout the day. As always, we will tweet links to our articles as soon as they are published via @HBOWatch.

Leave us a comment with your thoughts on this casting choice. Will Diana Rigg make good Queen of Thorns? If not, who would you like to have seen cast instead?