Just when I thought I had all the development news wrapped up for the Holidays comes yet more info on new series in the works. Doesn’t HBO realize that

it is the Holidays? They clearly don’t know when to slow down making my job a never ending one. At any rate here is the latest.

Yes, it is but, not with LAUGHS UNLIMITED. The concept for this programming under consideration is actually a drama. It tackles 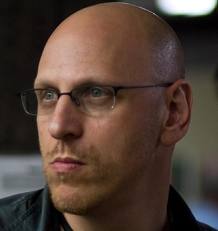 the issue of war veterans dealing with post-traumatic stress disorder (PTSD). Two creative talents, Oren Moverman(at left) and Anthony Swofford(at right), will be the executive producers of the work as it develops. If you don’t recognize them Moverman was the director of 2011’s Rampart and 2009’s The Messenger two action movies both starring Ben Foster and Woody Harrelson. Mr. Swofford’s most notable work is the novel “Jarhead” which later was made into the Jake Gyllenhaal movie in 2005.

Together this team has fleshed out a detailed premise that looks intriguing but you can judge for yourselves. It is about Billie Crown, an Army medic who returns from serving a tour in Afghanistan only to find that her husband is divorcing her and taking custody of their daughter. The medic hides her PTSD from family and colleagues so she can be reinstated as a Sacramento police officer, and so she can reconnect with her daughter. Her attempts in navigating the pressurized world of a beat cop while trying to assimilate back into normal society could turn Billie into a walking time bomb. At any moment, if the stresses get to her, they could jeopardize her career, family and life. The title is ironic military slang, and refers to a comedy club where Billie and her fellow cops hang out to relax and blow off steam. Does it sound something of interest? HBOWatch will keep an eye on it.

of producers has gotten a pilot order for a piece called LORIMER. They are David Marshall Grant, Sarah Condon and Andrew Haigh. I’m not sure why it takes a trio to get the project to life but nevertheless there it is. The more notable person here is writer Michael Lannan(at left).

Mr. Lannan is the scribe of a piece called LORIMER. He developed it into a full-feature script, but only managed to turn it into a short film of the same name. HBO has now optioned the original feature script and it is a premise familiar to HBO. It is about friends facing the world. We have already seen Carrie Bradshaw and friends, Vincent Chase and friends, Ben & Cam and Hannah Horvath and her girls.

Now we have the possibility of another posse. LORIMER is about three thirty-something friends living in San Francisco who grapple with all the options in contemporary life and the complexities of the modern gay experience. We’ll see if they make it to the screen and join the pantheon of HBO’s other series.

His name is Bruce Eric Kaplan and does have credit for writing for Lena Dunham’s GIRLS. He co-wrote episode nine, called “Leave me Alone,” with her. He is now head scribe on PEOPLE IN NEW JERSEY. There is not much to go on here but we do learn that it is about two siblings living just south of New York, who desperately attempt to get through life on a day-by-day basis. SNL’s Lorne Michaels is said to produce.

Now, I know you may not recognize these names and their headshots here, but they just might be responsible for future content on HBO and we can say HBOWatch was there from the inception. So, maybe, with that we can wrap up the Development Slate until next year!