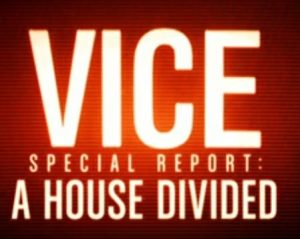 Straight from a Press Release comes the fourth in a series of special reports from VICE. The examination is America post-election 2016.

In First Post-Election Look At The Political Climate That Gave Rise To Donald Trump,

President Obama Speaks To VICE’s Shane Smith About The Fierce

Partisan Fighting That Dominated His Presidency And Divided The Country

President Barack Obama began his presidency with pledges of “hope over fear, unity of purpose over conflict and discord.” Despite many successes, however, the unity he promised has eluded him. As Obama’s presidency draws to an end, with the election of Donald Trump, America is painfully divided. Many fear that the vicious tone set by the 2016 election will continue under a new Trump administration.

Debuting FRIDAY, DECEMBER 9 (10:00-11:00 p.m. ET/PT), the HBO special VICE SPECIAL REPORT: A HOUSE DIVIDED presents exclusive access to the president, Senate Democratic leader Harry Reid, former Speaker of the House John Boehner, the president’s inner circle and key opponents, with VICE founder Shane Smith examining the rise of the Tea Party, the faltering of key congressional deals and the growing extremism that has left America more divided than ever. “I could not be prouder of the work that my administration has done,” President Obama tells Smith. “But there is no doubt that one of the central goals that I’d had, which was to make the politics in Washington work better, to reduce the knee-jerk partisanship, to elevate the debate – I haven’t accomplished that.”

Featuring archival news footage and interviews with politicians, policymakers and journalists, VICE SPECIAL REPORT: A HOUSE DIVIDED chronicles some of the most divisive issues of President Obama’s presidency over the past eight years through the eyes of both parties, including the 2009 stimulus package, the Affordable Care Act and a government shutdown. It looks at how these issues, and the battles around them, contributed to a political climate that gave rise to the candidacy and ultimate election of a non-politician and outsider, Donald Trump. 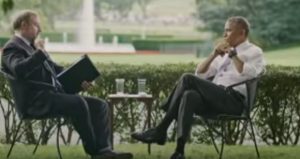 The president and Democratic and Republican lawmakers describe the bitter politics on both sides of the aisle, the conditions that created it, and whether it can be fixed.

HBOWatch will review upon its debut.