“What an amazing fuckin’ thing is these moving pictures.” That is a quote from me, not Al Swearengen. Another quote would be, “Good things indeed come to those cocksuckers that wait.” And wait we did all these years since the final episode of DEADWOOD debuted on HBO on 08.27.07. Actor contracts were not renewed and the story and the series came to a halt. And, I recall, we were not all that happy about it. But after years of trying to put something together DEADWOOD: THE MOVIE was announced in production in November of 2018.

The biggest miracle out of it all wasn’t that creator/writer David Milch had another solid script in him, but that the majority of the named characters would return. Ian McShane, Timothy Olyphant, Molly Parker, Paula Malcomson, John Hawkes, Anna Gunn, Dayton Callie, Brad Dourif, Robin Weigert, W. Earl Brown, William Sanderson, Kim Dickens, Gerald McRaney and Keone Young among others all returned to their characters. It just wouldn’t have worked without some of the original actors in the piece, but lo & behold, the majority of them are there. The biggest glaring omission is Cy Tolliver personified by the late & great Powers Booth. 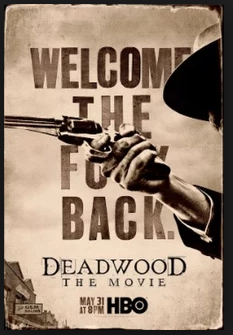 Getting down to the nitty-gritty this is what we got – South Dakota is entering into statehood and past and present residents of Deadwood are taking part in the celebrations. The widow Alma Garret Ellsworth has returned to the town with her ward Sofia, while Calamity Jane has returned to make amends with her old flame Joanie Stubbs, who has taken over the Bella Union gambling hall and bordello following Cy Tolliver’s death. Also attending is George Hearst, now a United States senator, who has returned to Deadwood to purchase land from Charlie Utter. Utter’s land is interfering with the installation of telephone lines in which Hearst has invested. Trixie, pregnant with Sol Star’s child, insults Hearst from her balcony, causing Hearst to realize he was deceived by Al Swearengen when he demanded that Trixie be killed years earlier. Hearst visits Swearengen, who is ailing due to liver failure, and demands his assistance in acquiring Utter’s land in exchange for not taking revenge against Trixie.

And another great scuffle begins Deadwood-style. And there also begins a great immersion into the lives of the denizens that call this God forsaken place home. David Milch and director Daniel Minahan honed this tale just perfectly and it matched the series from the early ‘00’s just right. Every witticism and cussword fall just as they are supposed to and every shot & angle draws you into the moment. It is a perfect story from the beginning. 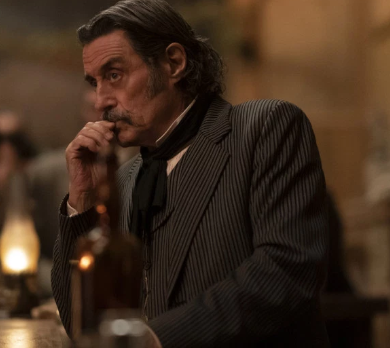 The movie’s start, by the way, has besotted Calamity Jane riding in from the ridge above town uttering & muttering the intents that drew her back. And as she moseys on down the trail the camera pans to Deadwood below. You just can’t wait to get down on its muddy streets and into The Gem Saloon. Due to the passage of time you wonder who is still in Deadwood and what has been going on with their lives. Is Dan Doherty still Al’s right-hand man? Is Jewel still there? Or how about Mr. Wu and his nasty pigs? Yes, everyone has their moments, but naturally, they have aged and life has aged them hard. In fact, to help frame this movie, a great quote from one of the executive producers, Carolyn Strauss, is wise. She stated, “It is about the passage of time. The toll of time on people. It’s mellowed some people and hardened others. And it’s about the town’s maturing and becoming part of the Union and what that event sets in motion, in a very personal way for the people that it brings in town and what ensues. The time has taken its greatest toll on Swearengen. He’s the person who really drove so much of the life of the town and there’s a sense of that power waning somewhat, and what ensues of that is a big part of the story.”

It is the crux of the story for sure. This is not a story about the players all once again juggling for power. It is not about Hearst once again causing an upheaval or Bullock striving to keep a semblance of peace. It is about the march of time and whether you go out with a whimper or out with a bang. Hah! If you are a fond friend of DEADWOOD you know the answer to that motherfucker. This movie is by no means the best way to introduce a newcomer to these characters. If you are not used to the style of language you’ll be thrown for a loop and a few solid nuances will mean nothing. This is for the fans who have waited their time to see how the likes of Alma, Joanie, Sol, Doc Cochran and the others all fared. They are a little worse for wear in ways, but they are still fighting tooth and nail ad the tough sons-of-bitches- they are in the little plot of land they call Deadwood.

All right you cocksuckers, you’ve been told! Seek out DEADWOOD: THE MOVIE across HBO‘s platforms. You won’t be disappointed.