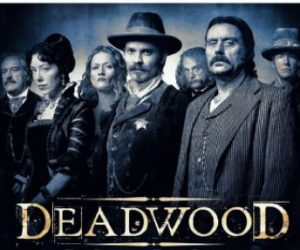 The stars & planets have really got to align in order for David Milch’s DEADWOOD to get back in front of an appreciative audience. The assemblage of the series cast, or most of it, alone is a daunting task. Not too long ago Timothy Olyphant, DEADWOOD’s Sheriff Seth Bullock, didn’t seem to think it likely that a movie would ever happen, though he wished it would. There is a solid script somewhere in the hallowed halls of HBO don’t forget.

Well, other indications that the project is not dead yet, despite the doubts, materialized recently when HBO filed for a tax credit in California for the project. I’m not sure how all that financing works, but the production company would get a tax break if the production was done in the state of California. It is just a healthy incentive to ensure film production isn’t outsourced to another state or country. The site Deadline explains it pretty well:

There is no green light for the film yet but HBO applying for a tax credit and getting one indicates that that the network has full intention of making it. It also means that the network has a finished script and financing in place, requirements for a tax benefit application. According to the California Film Commission regulations, a film or a TV series generally have to start principal photography within 180 days of being approved for a tax credit in order to receive it, though exceptions are being made in special circumstances. That means that Deadwood should start filming by the beginning of October.

Exactly who of the original cast would be on board remains to be seen but, as time goes on, we should hear announcements that the likes of Ian McShane as Al Swearengen, Molly Parker as Alma Garret, Kim Dickens as Joanie Stubbs, Brad Dourif as Doc Cochran, Robin Weigert as Calamity Jane, Olyphant and others signed on. HBOWatch will keep you posted.