Back on July 23rd we dropped the news that Danny McBride, of HBO shows EASTBOUND & DOWN and VICE PRINCIPALS, was working on a pilot for a new comedy. HBO has now given the green light to turn that show, called THE RIGHTEOUS GEMSTONES. Here via an official press release are some specifics including our first look at the family. 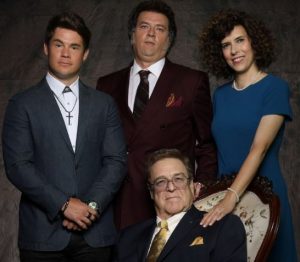 The new comedy, THE RIGHTEOUS GEMSTONES centers around a world-famous televangelist family with a long tradition of deviance, greed and charitable work — all in the name of the Lord Jesus Christ. McBride will star as main character Jesse Gemstone, who sees himself as a maverick in the ministry game, taking what his father, Eli Gemstone, has built and expanded it for a more modern audience. In addition to playing Jesse, McBride will also serve as a writer, director and executive producer on the series.

We realize that the above is not a lot of details, but more will materialize in time. It is just fun to know that it is official that the duo of McBride & Hill is returning to HBO. If you are not up to date and their style of comedy you have two shows to binge before THE RIGHTEOUS GEMSTONES appears on the channel. We will keep you posted.