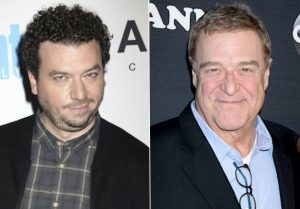 There has been nothing official from HBO but the comedic wunderkind behind Kenny Powers and Neal Gamby has another show in the works. Danny McBride, creator & star of EASTBOUND AND DOWN and VICE PRINCIPALS is shooting a pilot for a potential new HBO gig and this time he plays a televangelist.

The work is entitled THE RIGHTEOUS GEMSTONES and will star McBride alongside John Goodman (TREME & Roseanne). McBride plays Jesse Gemstone heir to the televangelist empire built and led by his father Eli Gemstone (Goodman). Jesse has plans of upping the potential of the TV ministry, in the new technological age if just given the chance. You got to just know that McBride will play the most unchristian like Christian there is.

Adam Devine (Modern Family) and Edi Patterson (the teacher who had a crush on Gamby in VICE PRINCIPALS) are also part of the family; Devine plays Kelvin Gemstone, the youngest sibling and Patterson plays Judy Gemstone, the only sister. Also in the cast of the pilot are Cassidy Freeman (Longmire), Tony Cavelero (School Of Rock) and Tim Baltz (The Opposition with Jordan Klepper and HBO’s ANIMALS.). Freeman plays Amber Gemstone, the wife of Jesse. She gave up a career of her own in journalism to devote herself to the church and her husband. Cavalero is Keefe Chambers, an ex-Satanist. Keefe was saved from the darkness by Kelvin. Now, he’s dedicated his life to serving the Lord and The Gemstones. Baltz plays BJ, fiancée to Judy. He struggles to find acceptance within the Gemstone family. The show also has seated as an executive producer longtime McBride cohort Jody Hill.

Casting news, obviously, has popped up but what caught this writer’s eye initially was the report out of a Charleston SC newspaper post that the show was being shot. McBride likes to man his shows down in his hometown area. The article as you can see here served as a casting call for locals to play extras like parishioners and so forth. As is typical for HBO, it does not comment on pilots being shot or shows in early negotiations so if there is any official news that THE RIGHTEOUS GEMSTONES is picked up by the network we should know this autumn, but come on its Danny McBride, his shows have done well for HBO and the likelihood that we will see McBride spreading the Gospel is pretty darn likely. We will keep you posted.