This site dropped way back in June 2017 that Damon Lindelof was eying up WATCHMEN as his next HBO project. At that time he was focused on basking in the afterglow of wrapping up the final season of THE LEFTOVERS. To each their own, but as one not familiar with the comic tale of The Comedian, Dr. Manhattan and the bunch I would have settled for more LEFTOVERS.

Nevertheless, Lindelof has confirmed that he has moved on to the next course and it is, in fact, the adaptation of the Alan Moore/Dave Gibbons “superhero crime noir” story. Below is just how he decided to tell us. 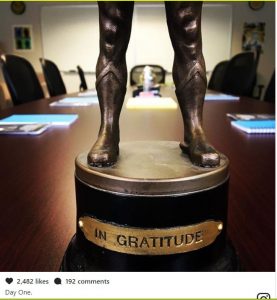 I didn’t, at first, understand why that image was pertinent, but I did understand its basic intent. It is a writer’s room and Damon Lindelof was embarking on his next HBO venture. Indeed, as it was stated, it was Day One. The staff must have gathered to start sketching out the plan of attack. Then we learn that the said project was WATCHMEN.

But, I knew nothing of the statue reference. I knew character names and that they are a retired superheroes called back to duty to save the world in an alternate universe. Well, SyFyWire and Deadline clarified all for me so I’ll pass it on to the equally clueless.  The world had been in gratitude to the heroes and upon their retirement were bestowed statues. The one pictured is of the Nite-Owl. I guess a leftover prop from the 2009 film was brought in to serve as an inspirational object and thus made it into this announcement.

So it is official that Lindelof has started to work on the project, but there is no official word from HBO that it is picked up us a series. Casey Bloys & co. need to see something first. We will wait for HBO’s official announcement at some point, but keep in mind this is work is just in the early stages. That gives us plenty of time to read the comics and/or watch Zach Snyder’s movie (on HBO’s streaming sites now) and watch the following helpful tool.