It seems just like a few days ago that HBO announced that the long awaited Season Nine of Larry David’s CURB YOUR ENTHUSIASM was going to happen. It seems like just yesterday that JB Smoove walked up on David’s dressing room trailer on the first day of filming.

Now we have word that production has wrapped up on that ninth season. That means it is a good chance that we see the series return in late 2017. You know, they have to promote it with key art and promos and get those billboards printed and such. Maybe, some teaser clip will drop with THE LEFTOVERS or definitely by GAME OF THRONES in July. We will impatiently wait for it.

The announcement did not come via a promo or press release but by the following declaration from show co-star Richard Lewis. 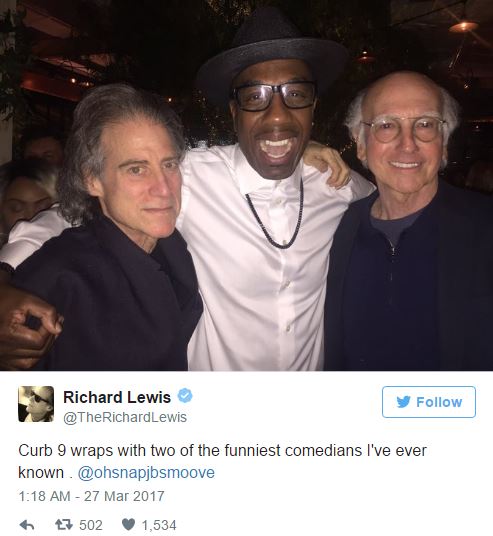 In addition to Larry David, JB Smoove, who joined in Season 6 as Leon Black, and Richard Lewis who has played since Season 1, we will also see the return of Cheryl Hines, Jeff Garlin and Susie Essman. They, of course, have been on since Season 1 as David’s wife (now ex-wife), best friend and best friend’s wife, respectively. Mary Steenburgen and Ted Danson will also return. They have appeared as off-and-on recurring roles throughout the run.
There is no word yet on any plot details, but it is going to seem like old times the latter part of this year when CURB YOUR ENTHUSIASM returns. “We’re thrilled that Larry has decided to do a new season of CURB and can’t wait to see what he has planned,” said Casey Bloys, HBO’s Programming chief and asked why he decided to come back, David said, “In the immortal words of Julius Caesar, ‘I left, I did nothing, I returned.’”

While we are waiting you can always binge Season 1 through 8 on HBONow/Go and/or check out Larry David’s HBO Films’ CLEAR HISTORY.