CURB YOUR ENTHUSIASM is shaping up and everyone you’d expect to be onboard is. Joining Larry David in the show after a six-year hiatus are Cheryl Hines (as Cheryl David), Susie Essman (as Greene) and Jeff Garlin (as Jeff Greene). Also appearing are Ted Danson and Mary Steenburgen. 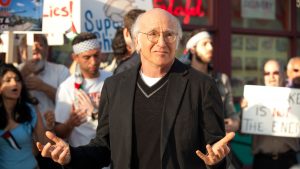 The concept of the ninth season must be all sketched out, don’t forget it is mostly improved, and a shooting schedule must have been plotted for the cast to become aligned at this point for another go. Exactly what happens is anyone’s guess, but we remember that Larry & Cheryl are still divorced, right?

To complete this season the stars did have to free themselves up from other commitments. As our source points out, Hines has Son of Zorn, Garlin is with The Goldbergs, Danson has The Good Place and Steenburgen is in The Last Man on Year. So we are darn lucky that all the stars aligned for a return to CURB. Plus we get the bonus of husband & wife team of Danson and Steenburgen. They are not strangers to the HBO or the show. Ted Danson appeared in thirteen episodes of CURB YOUR ENTHUSIASM from 2000 through 2009; he also was George Christopher in BORED TO DEATH. Mary Steenburgen was on David’s show for five shows and was also appeared in BORED TO DEATH and lately on TOGETHERNESS. As they did before Ted and Mary will play themselves on CURB. In fact, their first appearance together, back in 2000, was only the second episode of the show and was called “Ted and Mary.”

Also returning is the character Leon Black who is Larry’s roommate after Larry’s divorce. J. B. Smoove plays him and had this to say about returning to Larry David’s world.

VIBE: In addition to your Crown Royal collaboration, what else are you working on? I know Curb Your Enthusiasm is coming back.

J. B. Smoove: We back! We start working in November. It’s gonna be great. I don’t know the storyline yet. Larry always comes up with something crazy and we have a great time. I 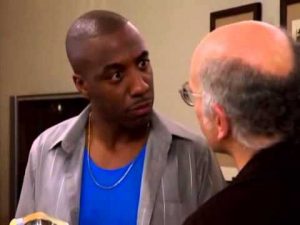 can’t wait to get back to that guy, I missed him. He took a bit of time off, about three years, so I’m looking forward to it.

VIBE: I think fandom has a lot to do with its return. What are some changes you hope to see in your character Leon?

JBS: I’m hoping Larry will allow Leon to look like this (points to self)

VIBE: That would be a big come up for the character. So much can change in that time.

JBS: How great would it be if Leon showed up with some class and he’s just a totally different person?! He’s elegant, he’s debonair. Maybe he changes his accent? Hey, we did leave off in Paris! Maybe, the storyline is Leon came back a different person. Oui, oui! And I love Paris, I love a good crepe.

Are you excited that the cast is all together for Season 9? We are. We don’t think anyone would be thrilled if the whole core cast wasn’t together. As soon as there is a  clip or a premiere date we will pass it on.