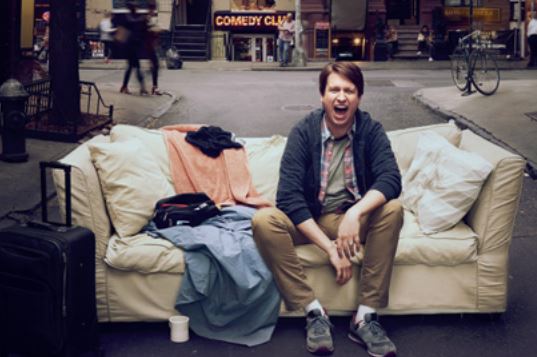 Comedian Pete Holmes, along with Judd Apatow, have created the series Crashing for HBO and the critics love it. See? Also below we offer up a review of the first four episodes of its premiere season. See what we thought and check back later for a review of the latter half of the season.  Let’s get this going.

The series starts off with Pete (Pete Holmes) and his wife, Jess (Lauren Lapkus), cutting vegetables when she says she wants to have sex on the floor. He makes a joke, she tells him no bits, and then we are treated to a wedding photo, a picture of Jesus, and comic strip involving an old married couple of demons. I suppose this was supposed to tell the audience three things: they’re married, religious, and they’ve been together for a long time. This way, the show doesn’t need to tell us these things, but it will later on anyway… in case the hints were too subtle. It also 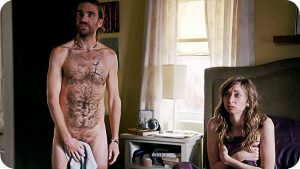 seemed a bit creepy to see Jesus while hearing the sounds love-making.

This couple has apparently been together for a while, but you wouldn’t be able to tell from the way they make-out. She asks to touch his asshole. He objects. She offers for him to touch her asshole. He objects. She suggests they 69. Not only does he object, but he tells a bad joke about it. Jess said no bits, remember? Not only is it clear that Pete is more comfortable doing the “same old same old” for their sex life, but he’s obviously not paying attention. She wants to try something different and he’s not only turning her down but not offering her anything that she could work with. This couple is just not jelling.

Pete leaves in the middle of his quality time of watching videos with his wife to get to get on stage for a stand-up comedy open mic. I don’t believe I’ve ever watched any of Pete Holmes’s stand-up before, but I’m assuming that the stand-up he lead with his not his best work. It was also followed-up with only a few chuckles from the audience. This is one of the problems I have with the series. It’s a show that features a few comedians and the main character is a struggling comedian that is trying to make a career out of it, I understand that. The problem with this is that the “bad comedy” is so forced that the stand-up segments are either awkward to watch or they feel completely boring. The show is being set up to show how Pete evolves from his sheltered mentality to someone that is the epitome of the art of comedy. It is no easy feat to accomplish and unfortunately, the show is struggling with it. It’s difficult to be entertained because of this, but that’s just me. 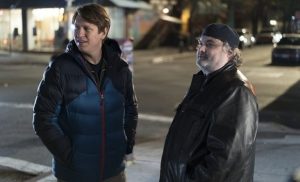 Pete walks in on Jess after she’s just had sex with a bloke named Lief (George Basil). Apparently, Pete has never seen what she looks like after an orgasm. This another scene that can be difficult to make funny. Done wrong, it can feel tragic and that’s likely to bring down a show that’s meant to be a comedy and that’s not how you want to start the first episode of a series. Luckily, it didn’t come off as tragic, but awkward… very awkward… and that’s before the other guy walked back in the bedroom. Pete acts like this is the first time that he’s seen her naked and has no idea what to say. They met in high school. Is his brain still in high school?

When Leif walks in, things finally get a bit funny. Is he trying to counsel Pete? I think the series should have started here. It would have saved the awkward scenes between Pete and Jess. We also didn’t need to see his stand-up to know that he’s a struggling comedian the way he tries to crack jokes during conversations. Pete gets probably the best advice so far at the comedy club: when terrible things happen in life, you still go on. His set was still horrible. He still can’t turn tragedy into comedy gold.

So Pete & Jess are splitting up leaving Pete to have to crash with different friends until he finds a permanent place to call home. He meets idol, Artie Lange, after the show. I sense a “never meet your heroes” lesson coming up. First, he loses his car (after Artie pulls a stunt), traumatizes some kids with his story, and then tries to “take his wife back”. Leif is still there. I don’t know why, but he’s the funniest guy in the episode. When he tries to counsel Pete, he says the most nonsensical things.

Pete gets mugged and Artie Lange runs again. Why does he want to crash with this guy again?

In this episode, Pete hits the road to take Artie to Albany in exchange for the opportunity to open for him on his show. On their way, Artie tells Pete he needs to keep him sober so Pete makes it his personal mission to take alcohol away or take a drink for him. TJ Miller also appears and may have been the highlight of the episode. It felt like he may not have brought his A-material; it could have been because my expectations were higher than what was realistic. 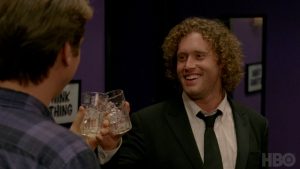 Pete sees that Artie is faced with his biggest temptation yet: a woman with drugs named Susan (Gina Gershon). Pete continues to be a white knight and does whatever he can to be the responsible friend to Artie, who only showed he was a friend by allowing him to crash at his place and give him bad advice. Pete intercepts Susan and then runs into the flaw in his plan: he took her away from Artie, but he had no idea what to do next.

After getting sprayed with mace, he takes her home. She makes an advance on him and he refuses her for some reason. It’s unclear whether he does this because of some unspoken bro code with Artie or that he’s not over Jess. Either way, Susan screams at him until he leaves. He returns to the bar where he finds that Artie left and that he’s going to be crashing with a different comedian: TJ Miller.

You would think that after seeing how depressed Artie was all the time that Pete would think twice about how glamorous being a stand-up comedian is because it’s quite different from his clean positive Christian mentality, but this season is eight episodes long so it can’t be over yet. 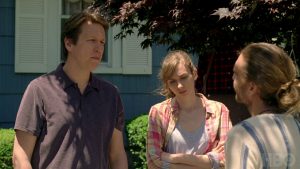 Pete witnesses more of the glamorous life of a comedian as he sees that TJ Miller can’t turn off. He’s quite different from Artie, who is quite depressing about life and comedy. Comedy is a religion according to TJ. We also learn alongside Pete that Jess is having a yard sale because she’s moving away.

At the yard sale, TJ is being a regular weirdo and Leif is still trying to help Pete cope. When Pete’s dresser is sold, Leif and Pete set off to get Pete’s comedy journals back. It’s still really odd how Leif tries to bond with him, even to the extent of complimenting his comedy work. The buyer refuses to let Pete take the journals back and it’s obvious he wants one thing for them: money. Leif pays him $250. In another bizarre twist, Jess reveals that the money from the yard sale is going to Pete to help him out. That doesn’t last too long because TJ Miller decides to burn the furniture as a tribute to Pete moving on. I guess that means Pete is not getting any money.

Pete begs a club owner to let him go on stage. Reluctantly, he says that if Pete gets five people to buy tickets, he will put him on. It could have been just a clever ploy by the club owner to sell tickets. He calls it “barking”. The whole operation seems like a scam: get some desperate comedians to sell tickets by handing out flyers filled with lies on the promise that they will perform. This would all cost him nothing. 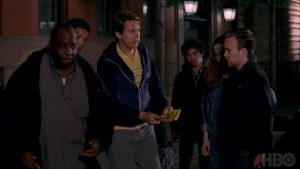 Pete’s desperate attempts to get people to sell tickets quickly turn into a desperate quest to find a bathroom. I guess we needed a break from seeing him bark at a street corner and give another barker the opportunity to take his “territory”. The rest of the episode turns into his desperate quest to get some territory of his own. I guess technically this makes him more homeless than he already is. It takes the wisdom of a drug dealer for Pete to establish his presence on his corner. The other barker does not take kindly to this act and a “fight” breaks out. The barker breaks a car window and the angry owner reacts. It seems a common trend in this show: comedian riles up trouble and comedian runs away.

Pete returns to the club to find that Hanibal Burress is performing at the club and he can’t watch because he only brought in two people. He finally gets the remaining three people he needs to get on stage. His bit must be better this time because the Asian tourists actually laugh when he’s performing. It’s amazing how some laughter seems to make the stand-up comedy somehow funnier. The other comedians quickly take the wind out of Pete’s sails by telling him they only laughed whenever they paused. It seems like he may have a regular club to perform at where he doesn’t have to spend money to do it.

It hasn’t been a great series for me so far, but I’m committed at this point. Heck, I think I may actually check out what else Pete Holmes has to offer when there isn’t an overarching plot involved. But, those are just my thoughts. You can let us know what you think below. Are you Crashing?