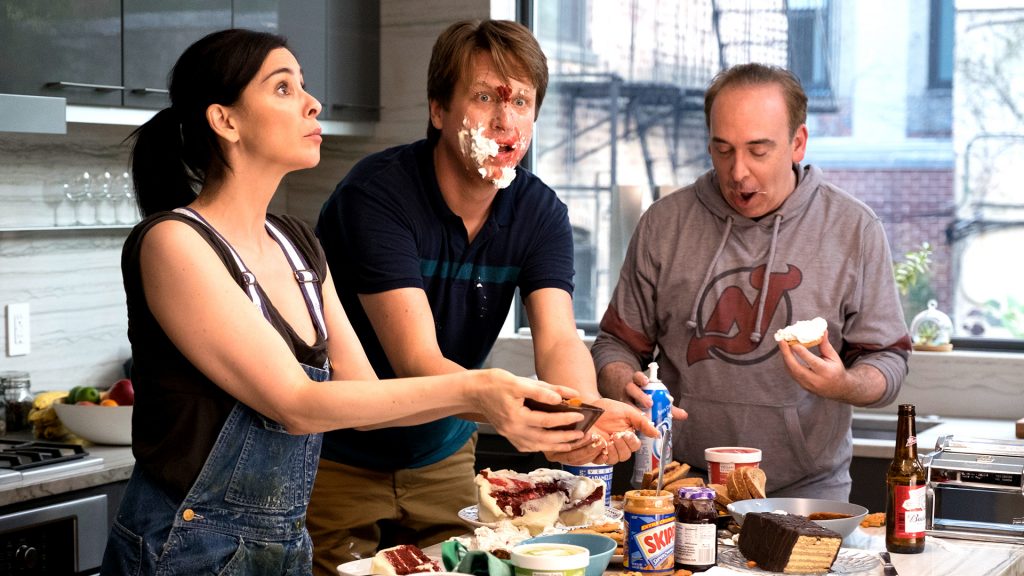 Together with Judd Apatow, comedian Pete Holmes has chronicled the life of a man dedicated to pursuing his love of comedy. So naturally, he’s single and homeless. While the show title could mean crashing on stage when you bomb a set, I prefer to think of the fact that we’re all crashing our way through figuring out life. We are essentially all bulls in china shops, just trying to figure out how to get through life as gracefully as possible. And with less broken valuables. Here is what’s been happening in Pete’s life. 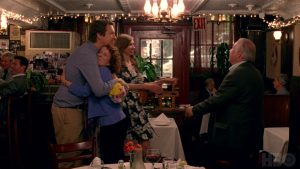 You know how sometimes you see a parent and a child and you think, “Wow, I wish I was that close with my parents”? Well, this is not that. Pete has yet to break it to his mom and dad that Jess is gone and shacking up with a guy named after a plant. Okay, different spelling, but still — Lief? Since the parents are in town for Pete’s mother’s birthday, Pete begs Jess to play along until he can build up to telling them of the break-up. His time frame is a little long though, and Jess isn’t pleased. Which, to an extent, yes I understand you want your ex in-laws to know they are in fact your ex in-laws. But since Jess is the one who created this situation by screwing someone else, I really don’t think she’s allowed to dictate any boundaries here. But she does, and the parental units are not pleased. Even less pleased that Pete’s dedicating his life to comedy. And according to them, not even good comedy. Ouch. You crash when your parents don’t approve.

Pete continues his epic couch-surfing lifestyle but is in sore need of a couch. A chance call from Artie gets him in the door with Sarah Silverman, who likes to collect out of luck comedians like puppies. Personally, I’d rather have the puppies. She lets him crash but it has to be as long as he’s working toward something. This isn’t a lifestyle you get to keep forever without working towards a goal. Good boundaries, Sarah. An in from Sarah gets him a chance to observe the warm-up comedian at Rachel Ray.  After some choice words from the warm-up and a brief tussle with security, Pete gets his chance. And what a chance it is! If anything, this entire episode proves how much nepotism moves the world. In this day and age to get a foot in anywhere, you need to know someone who can vouch for you. Lucky for Pete, some big name comedians have his back; without it another crash in life is certain. 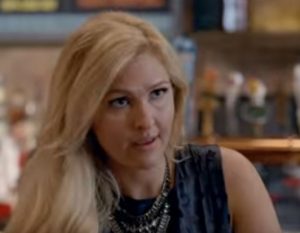 efore the fall, yes?  Well, that proves true for Pete when he gets a little too big for his britches. It’s almost like constantly bragging about something wouldn’t come back to bite you in the ass? If only…  Eventually, Pete takes one tiny step too far and insults someone important. In this episode Plant Boy, aka Lief, turns out he had not informed his wife of his affair when Pete and Jess split.  His wife (pictured), our title character played by Jenn Lyon, tracks Pete down to confront the situation. Upset and clearly vulnerable, she threatens violence, worries about her fortune, and propositions Pete for sex all in approximately five minutes. Grief does interesting things to people. The biggest part of this episode, in my opinion, is the idea that needing support is something everyone goes through. Pete has accomplished something in the world of comedy. The only problem is some people see it as a joke, and others are genuinely congratulatory about it. But everyone has that moment where they are unsure if something is good and need people to say that it is.  Reaffirmation is powerful. In the episode, there is also another thing everyone does: brag. Everyone brags at some point. The key is to find the balance between casually mentioning the thing versus taking any topic of conversation and making it about yourself and this cool thing you did that is maybe vaguely related but most likely not. Remember, you can crash without support.

Pete is back at Artie’s for the time being, and Artie is determined to cheer him up. The only problem being that their idea of what’s  enjoyable is very different. Since Artie’s choice, strip club breakfast doesn’t do the trick, the guys hike it out for Pete to see his college roommate’s wife get baptized into their church.  Pete, of course, sees Jess and gets harangued by his pastor who is convinced Pete drove his wife to cheat. Really now? As the baptism commences, Jess has a moment of clarity. Seeing Jess’s moment of clarity induces Leif to have his own.  Seeing Leif clarified by Jess’s clarification, Pete too becomes clear about wanting a wife and family over comedy. And with everyone else getting clarity, all the way in the back comes Artie who was persuaded to take a chance on it all might just be having one too. Clarity for everyone! You get clarity! Everyone gets clarity!  But how much of it was real? After a season of watching Pete work at his stand up, is he really going to throw it away? I look forward to finding out. Do you, then await Season Two of Crashing in 2018.

You can find Season One on HBONow/Go.