HBO’s favorite failing stand up comedian is back for another season of unfortunate hijinks and struggling jokes. Pete Holmes returns as himself, Pete the homeless, Christian, divorced comedian. To say down and out is an understatement. We find him living in a garage and working at Cold Stone Creamery when he isn’t out slinging out comedy club handouts.  But let’s break down the ensuing insanity one episode at a time. 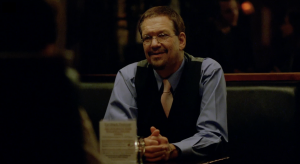 As previously mentioned, Pete has certainly been doing better than right now. He’s living in a garage, in fact, the attached domicile houses Pete’s archenemy -Leif, the man with whom his wife cheated. Yep, if that isn’t supremely complicated, I don’t know what is. But he doesn’t mind the hustle if it gets him closer to his dreams. Or maybe his dream girl?

While at the door at the comedy gig Pete takes the opportunity to assist a cute girl, Ali Reissen, with some taping time of her routine. Pete is smitten but doesn’t expect to see her again. While Pete is just a low notch on the comedy totem pole, this episode boasts many names who climbed their way to the top.  Back as Pete’s sidekick is Artie Lange, as himself.  But we also get glimpses of Gilbert Gottfried, Dave Attell, Doug Benson, and Jay Oakerson. A chance encounter with Penn Jillette, the atheist of the title, leaves Pete questioning everything he believes in and the shift causes deep talk with Benson and quite a wild side to emerge. In this state, Pete is able to hook up with Ali. Go, Pete!  Maybe you can actually move on from your ex-wife.

Pete wakes up at Ali’s and while she clearly wants this to be a one night, casual instance, Pete doesn’t get the point. He makes himself quite at home at Ali’s. Cooking up some pasta, he places the hot glass on her lovely non-tempered glass table. Crack!  Dude, not cool. Now granted the table was an accident, but even if you feel more attached to her than she does with you, you don’t just make yourself at home. Not cool.

So of course when Ali gets home she is rightfully pissed off.  She’s had a guy squatting in her house all day (he truly crashed) and she didn’t even want to hook up with him much anyway.  But after finally getting kicked out, he finds himself spending the day with Leif.  How he ended up living with his archenemy, I could never understand.  But there you go.

Leif insists on a fly by the seat of your pants kind of day. Let the universe guide you. So the two embark on a journey of epic proportions that ends with Pete in handcuffs at the hands of the police, not some kinky encounter. The most interesting aspect of the episode though is when Pete speaks to Dr. Oz and asks him if he is an atheist. Oz says that he’s a believer and that science and religion can be in harmony. Which of course just serves to further confuse Pete on his spiritual journey. 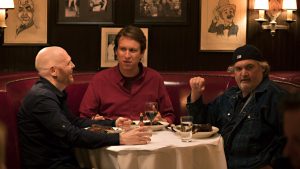 Desperate for a place to stay, yet again, Pete is continuing to infringe on his friend’s social graces after his overnight in jail. When Artie can’t take it anymore, he ditches Pete on comedian Bill Burr. Burr notices this immediately but in fact, doesn’t balk at the idea of hosting him. What Bill really wants is to have some ‘bro time’ with someone. The two get to chill and riff off each other, which is a great way for a comedian to test and create new material. The whole “be more masculine” sound bite we’ve seen occurs here.

When out viewing Bill’s performance, Pete films a new bit that he helped create and the controversial video goes viral quickly. Pete is now feeling like he’s destroyed Bill’s career yet Bill seems to have not even heard about it. So do you come clean and hope Bill doesn’t hate you enough to kick you out, or do you continue the con and hope he doesn’t find out you posted the video?  Well, it all plays out for Pete and he ends up back on his way to living in Leif’s garage.

We start this episode with Pete hearing Leif having intercourse and Pete, feeling frisky, releases some tension for himself. Only to find out the next morning that the melodious moans he got off to were, in fact, those of his ex-wife. Awkward.  Jess and Leif very much want all three of them to be friends.  And while it is weird, all sorts of couples exist in the world.  Some that have more than two involved (Looking at you, Mormons). 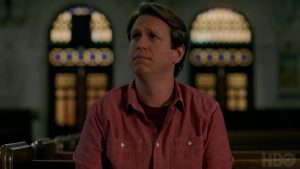 Pete decides to go along with it, meanwhile finding out one of his stand up buddies got an HBO special with Whitney Cummings. He isn’t that happy for Porter but hides it better than everyone else so he’s the only one to get invited to the show. He doesn’t think Porter is funny though, which gives a lovely shade of envy over the whole episode. At the taping, Porter, who is notorious for his bushy beard, ends up nervously shaving it off bit by bit before his set. I have to give the writers credit. The screen cuts from the other comedians on stage to Porter shaving off another chunk of beard was hilarious. In the end, he goes out clean shaven and kills it. Pete even admitting to himself how funny he is.

Pete also tries to hang out with Jess platonically. Or is it? When the two get trapped in the garage without power, candles set the mood for romance. When Pete makes a move thinking they will use each other for sex the way she did with Leif, she shuts him down. She wants them to spend time just as friends. Try and rebuild their friendship. Pete is just not having luck with the ladies lately.

One aspect that I found fascinating in this episode is the first lines of the video at the top where Pete is speaking with Whitney. Though played off as a joke about talent, it actually offers a very deep question. Is someone born with innate talent? Or can that talent be cultured with hard work? Or is it a mix of both? Is the potential a person is born with the limit of what they are given and they can work to reach that level, but it is possible that level might be significantly lower than someone else’s? What do you think about talent? What do think about Pete as he ponders all this? In the weeks ahead it looks like Pete might really be starting to connect. Is that what we want for this guy or is it funnier when he doesn’t? Leave us a comment below!