Coming in February 2018 is Alan Ball’s return to HBO (SIX FEET UNDER, TRUE BLOOD and HBO Films: THE IMMORTAL LIFE OF HENRIETTA LACKS are his) with a show we don’t really know a lot about – HERE AND NOW. We reported back on 09.18.16 that he was working on a new series. On 01.08.17 we published a post talking about casting and then things went quiet about HERE AND NOW. Well, the series is almost upon us and we are now given our first look at the family drama that will begin to unfold this winter. Here is it’s first teaser.

“Family is this great experiment” is a quote that stands out in this clip. Alan Ball has already examined one in an interesting way with the Fisher family in SIX FEET UNDER and recently highlighted the issues conflicting Henrietta Lacks and her family in that recent HBO Films presentation. With the tone of HERE AND NOW evident we’re beginning to think he prefers the dynamics a family drama offers as he has come full circle and returned to it after giving us seven seasons of the racy and wicked TRUE BLOOD and four rough action seasons of Cinemax’s BANSHEE in between.

It is odd in preparing for this piece that HBO.com, HBOMedia and HBOPR, sites we here have access to, don’t mention this series yet. The video appears on the TV dial and at YouTube but it is evident that heavy promotion for this series has taken a backseat to the show coming ahead of it in January. We will show you more once it comes available. In the meantime we repeat what we do know which is the simple premise: 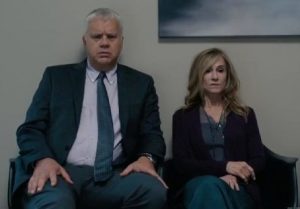 The series shows us a family – a philosophy professor (Tim Robbins), his lawyer wife (Holly Hunter), their three adopted children from Somalia (Ashley, played by Jerrika Hinton), Vietnam (Duc, played by Raymond Lee and Colombia (Ramon, played by Daniel Zovatto), and their sole biological child (Kristen, played by Sosie Bacon). This seemingly perfect, progressive family is in actuality harboring deep rifts. Then, one of the children begins to see things others cannot. Is it mental illness? Or something else? The series is a tragicomic meditation on the complicated forces at work on us all in America today. Hmm, I bet whichever one is the special child is not going to be a fairy, vampire or were-person. Trust me.  Just how special and wonderful these people are will have to wait until February 2018. Are you interested?