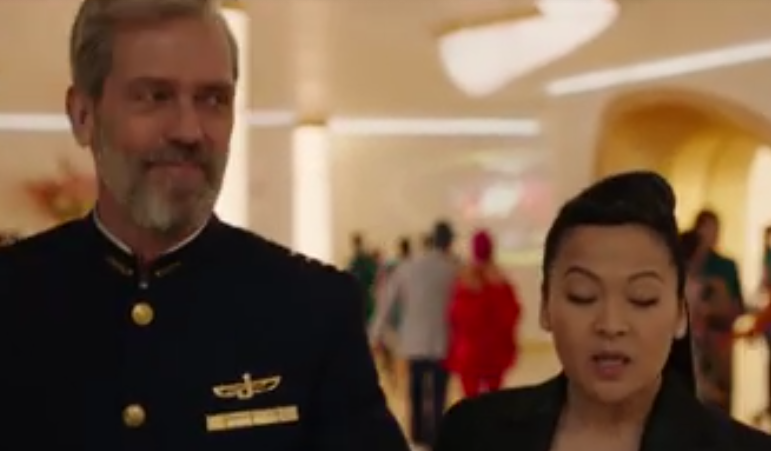 “Who fucked up?”  This question proposed by Iris Kimura, an associate owner of the titular AVENUE 5, is indicative of the tone of all of showrunner/creator’s Armando Iannucci’s works. Iannucci is known for the political satires, The Thick Of It, In The Loop, and VEEP.  Iannucci manages to capture and lampoon the temperament of Western Societies, without being cliché’ and on-the-nose. Now with AVENUE 5, the showrunner and Home Box Office will give us “a space tourism comedy set 40 years in the future when the solar system is everyone’s oyster.”  Space set as the backdrop of a comedy is not wholly original, however, the 1:27 teaser trailer rivals the production value of most ‘serious’ science fiction programming.

In the teaser, we are introduced to Hugh Laurie’s Ryan Clark, the Captain of the AVENUE 5, a luxurious tourism vessel for adventurous and deep-pocketed customers. Clark is greeting passengers while being accompanied by Iris Kimura, a fixer who acts directly on the behalf of the owner of AVENUE 5.  The dynamic between Captain Clark and Ms. Kimura does not appear to be entirely amicable.  We can expect backstabbing (literal and metaphorical) between these two, not unlike the relationship between President Selina Myers and her cabinet on Iannucci’s award-winning HBO entry. Familiar faces from past and present revered HBO shows such as SILICON VALLEY and TRACEY TAKES ON, are courtesy of an impressive cast that includes Zach Woods, Himesh Patel, and Nikki Amukka-Bird. 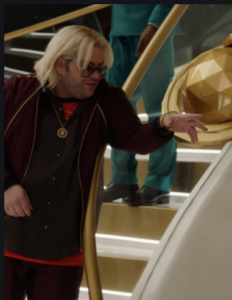 Another major player is Josh Gad’s Herman Judd, the billionaire face and name behind AVENUE 5.  Judd has advertisements of himself placarded all over the vessel, albeit with a much trimmer waistline. With many heads of conglomerates currently pushing their own space programs, we can safely hypothesize that Judd is an amalgamation of these conceited yet visionary minds.

Apparently, in this first season, and possibly in the pilot episode, there is a near-catastrophic malfunction onboard the luxury spaceship, hence Ms. Kimura muttering the words, “Who fucked up?”  Undoubtedly, this new block of HBO programming will explore the notion that no matter how far humankind ventures from the third rock from the sun, we are still unable to own up to our own faults and to look past the faults of others. The AVENUE 5 itself is a marvel of production design, and Iannucci’s track record suggests the writing and acting will complement the aesthetics.

AVENUE 5 journeys to the deepest realms of our solar system in January 2020 on HBO.

And ‘No’, we didn’t fuck up – Here is the teaser in question: