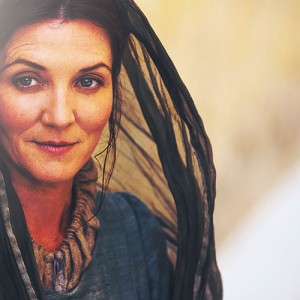 Lady Catelyn Stark is a good woman. She is a dutiful wife. She is a loving mother. She goes by the old code of her Tully motto: “Family, Duty, Honour.” Considering she married into the Stark family, you would think she would live by the Stark motto of “Winter is Coming.” I think it is more appropriate that she still follows the Tully code. She is an honourable woman, which is more than I can say for some of the other female characters in Westeros.

Family: we are introduced to Lady Catelyn Stark in the season premiere of season one. We find out that she is the beloved wife of Ned Stark and the respected Lady of Winterfell. She has five children: Robb, Sansa, Arya, Bran and Rickon. Everything in the Stark household is done just so, in accordance to Stark traditions. And Catelyn Stark is woman who fulfills her role as chatelaine, mother and wife.

Catelyn often counseled her husband in matters of state and household management, but there were times that she did not like, or agree, when Ned had to perform his duties as Warden in the North. She is a woman with a tender heart and loathed the idea of Bran riding out to witness his first execution, of a ranger that fled the Wall. Ned grimly tells her, “He won’t be a boy forever, and winter is coming.” 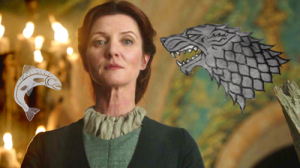 All the years of being from Riverrun still show. She often says to Ned that she still feels as if she is an outsider who doesn’t belong in the north. Queen Cersei, upon visiting House Stark with her husband and retinue, is a woman from the south and you can’t help but compare the two. One is fair, empathic and dutiful. The other is vain, spoiled and selfish. The only thing these two women have in common is the love they feel for their children. However, Catelyn does not lie, scheme or cheat people in Winterfell for personal gain. She does not commit incest. She would die to protect her children. She also has an amazing gut instinct, especially when it comes to protecting Bran, once he became paralyzed. She instinctively knew that the Lannisters were behind his fall and assassination attempt. No amount of love she feels towards her children and husband would prepare her for the catastrophic chain of events that would unfold.

All at her doing. 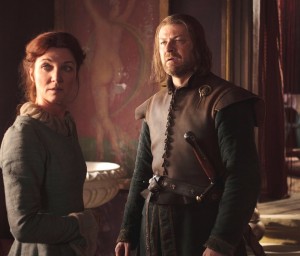 Yet, even the noblest of characters have their flaws. Catelyn’s flaw was trusting the wrong person: Petyr Baelish, also known as ‘Littlefinger.’ Petyr grew up in Riverrun, alongside Catelyn and her sister Lysa as a ward. It was also made know to the fans (in the books and the series) that Petyr had more than just a passing interest in Catelyn. Putting her blind faith in Petyr, she falsely accuses Tyrion Lannister of trying to murder her son Bran. Which fans would think – “Hey lady, where are your brains?! Tyrion tried to help your son by giving him plans for a saddle to help him ride! You’re accusing the WRONG Lannister!” Even I shook my head and said to myself, “Oh my God, what she is thinking?!” When all was said and done, they brought Tyrion to the Vale of Arryn, Lysa and her son tried to pass judgement and trial, Bronn defended Tryion and they both walked out of there free. Talk about a pathetic sense of justice and a HUGE waste of time on Catelyn’s part. Tyrion is the only Lannister worth knowing and giving a damn about. Her actions caused Jaime Lannister to attack and wound Ned and create such tension between the Stark and Lannister households, that fans waited with baited breath, knowing the outcome was going to be bad.

You have to feel sorry for Catelyn and her intentions. She was led astray by a real kniving man (Baelish) and betrayed. Her daughters were far away in King’s Landing; her husband found out the truth about the Lannister children and subsequently, was executed for treason. This poor woman left her two youngest children, only to become a widow and have to fear for her daughters’ safety. 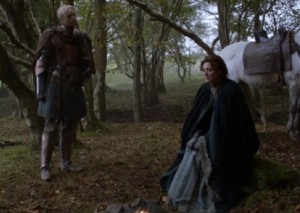 Duty: season two portrays Catelyn in a very different position: she acts a diplomat for her son, King Robb. She visits King Renly and negotiates a peace between Renly and Robb. She also begs Renly to talk to his brother, Stannis and avoid all out warfare. You have to give Catelyn some credit: she is forward enough to speak to Kings about forging alliances, making peace and forgetting about war altogether. However, as history has shown, women never really get to influence men in matters of warfare. Renly is too preoccupied with the idea of the Iron Throne. Stannis was too preoccupied with invading King’s Landing. One good thing to come out of all this misery is that Catelyn meets Brienne of Tarth, a strong, fierce and very tall woman who would rather fight as a knight, then be forced by her gender to fulfill the tradition roles of wife and mother.

As Renly is killed by a mysterious black fog, Catelyn talks sense to Brienne and tells her to come with her instead of being hanged for murder. Catelyn also promises Brienne a place in her household. You can see her motherly side coming out, wanting to offer comfort and shelter to another woman. The two women forge a bond and depart for her son’s camp. In a very surprising move, Catelyn goes against her son and secretly releases Jamie Lannister, with the idea that Jaime could be exchanged for Sansa and Arya. And guess who planted that seed in Catelyn’s head? Petyr Baelish. (Lady, did you not learn the first time around?!) To say that Robb was displeased with his mother was an understatement. I can see why she did it: because she loves her children dearly and wants to see them safely returned back to Winterfell. Can you really begrudge her that?

Honour: the last we see of Catelyn is when she is speaking to her son Robb about what marriage means and how it should play out. Marriage is a sacred contract and should not be entered into lightly. She also tells Robb that there was the matter of the betrothal contract that had been established with House Frey. This is a serious issue and to break the contract means to lose the support of House Frey and gain a very dangerous enemy at the same time. No matter how upset King Robb was with Catelyn for releasing Jaime, he really ought to have listened to her. The first time a Stark did something that wasn’t very honourable (keeping Tyrion Lannister hostage and falsely accusing him of attempted murder) ended with bad results. It’s like watching history repeat itself. Only this time, King Robb really should’ve thought about what was at stake. We saw little of Walder Frey in the first season. But what we saw was enough to know that he was a cantankerous, wily old man who wouldn’t hesitate to dish out punishment when angered. Catelyn tried in vain to tell Robb that by dishonouring the betrothal contract was going to bring the wrath of House Frey down upon them. It’s not only Robb’s life at stake. It’s his banner men, his brothers, his lands, his honour.

I’m afraid that Catelyn won’t just walk out of Robb’s camp, the way she did when she was in the Vale. Bloodshed is the order of the day. Treason and betrayal are daily acts. In a violent world, Lady Catelyn Stark is one of the few people left who believes in honour.

Too bad it probably won’t be enough to save her.