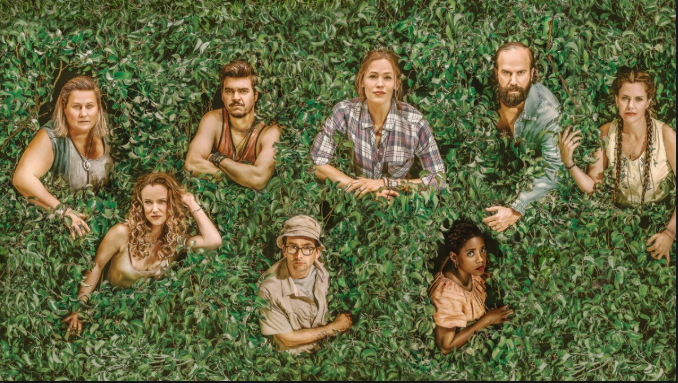 The final episode of Camping aired and wow do we have some stuff to discuss. Nina-Joy (Janicza Bravo) and George (Brett Gelman) make the final decision on where they stand. Jandice (Juliette Lewis) encourages Miguel (Arturo Del Puerto) and Joe (Chris Sullivan) to try out something. And everyone packs up to head home, but who is going home with whom? And I wonder when everyone will be coming down from the drugs and alcohol because y’all apparently know how to party. As we saw previously, Braylen (Rene Gube) showed up to declare his love to Nina-Joy and deliver a very lost Carleen (Ione Skye.) But now that Nina-Joy is actually listening to him and not focusing on the screwing-someone-not-her-husband aspect, she realizes how unbelievably boring he is.  Ouch. But just as she has this revelation, George has his own.  Nina-Joy worries about George’s rage, and the truth is he has a lot of it. And some of it, fairly so, is directed at her. He wants a change and to move on from the pain she’s caused him.

Meanwhile, Jandice feels like no one understands her and feels used for her sexuality as both Miguel and Joe pressure her for some naughty time. She encourages them to engage in their own desires, though they think she means with her. Not so much.  Jandice believes she’s seen some chemistry between Miguel and Joe all weekend and if they want any chance with her, she wants to see them do something together.  Though Joe seems hesitant, it appears Miguel really does want to prove himself to Jandice. Oh my! But it doesn’t take her long to just move along from him to Harry (Bridget Everett).  So Miguel is out in the cold without a woman again.  He’s not enjoying it as much as George is.

Things come to head for Kathryn and Walt and Jandice as well.  Jandice encourages Kathryn to embrace her sexuality and even starts giving her a tattoo of Walt’s name since, as we saw at last episode’s end Kathryn admits to not wanting to have sex with Walt. Well, it doesn’t take long for the two to clash and suddenly Kathryn has a “WA” tattoo instead of “WALT.” Fast forward even further, Kathryn attempts to have sex with Walt even though he doesn’t want to. She doesn’t understand that she’s not just giving him what he wants. He wants her to care and to want it. He wants her to not just control every minute aspect of everything.  He wants her to put aside her Type A-ness for just a little bit. But it doesn’t go well.  She can’t let go and in the end, he has incredibly fast sex with Jandice. The episode concludes with Kathryn and Walt driving down the road, holding hands while Kathryn cries.

The ending felt in some ways how it should have ended.  I certainly didn’t suspect Nina-Joy and George to stay together. He does have a lot of rage to deal with, but also she cheated and seemed like she wanted him to get over it and when you hurt someone like that you don’t get to set a timeframe on healing. I also suspected Miguel and Jandice wouldn’t work.  It seemed very much like a sexual rebound from the start. Miguel isn’t even divorced yet and she’s pressuring him about marriage? Not cool. And while in some ways I certainly agree with Jandice, in other instances she exhibits how callous a person she can be. She never even talks about her kids. And perhaps it is painful for her, but she admitted to lying to Kathryn about having a sister and seems like perhaps she likes having attention at times. I was happy to see Joe come to appreciate Carleen more because she’s a genuinely kind person and wants to be there for him and he doesn’t even notice it.

The most frustrating aspect of the episode is the lack of hashing out between Kathryn and Walt. We know he’s carrying a lot of anger but he rarely actually tries to talk to Kathryn about what they need to change or fix. All he does is blame her. And I can understand his frustration to a point. Their relationship doesn’t have much intimacy anymore and Kathryn’s personality continues to wear on Walt. Even though he loves her, he feels like things aren’t enough. And if you feel that way in a relationship, you should say something. It’s easy to watch this show and feel so bad for Walt for having to “deal” with Kathryn. But in reality, he is just as at fault for their marital problems as she is.  If you don’t say or do something to change the situation and just blame the other person, then you’re just as much at fault. And briefly sticking your penis in another woman’s vagina doesn’t solve it.

Overall I found the series pretty funny and I greatly enjoyed the cast. David Tennant is my favorite Doctor on Doctor Who and Brett Gelman is absolutely hilarious. And even though at times I couldn’t stand her, Juliette Lewis was fantastic as Jandice. I would love to watch the British version that this is adapted from, which features the delightful Julia Davis from Sally4Ever! So final thoughts? Did your favorite couple make or break it? What do you think would happen to Kathryn and Walt now? And would you ever get a tattoo of your spouse’s name? Sound off below!