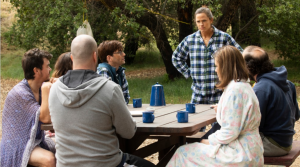 Much of the action in Camping’s fifth episode transpired off of the camping grounds, and away from nature in the confinement of rural civilization.  Yet, the most poignant moment of this past Sunday’s 10:30pm broadcast was back at camp, on a secluded hiking trail. In one of the best scenes thus far, Nina-Joy and George have an intense discussion over their purpose of being present at what is supposed to be Walt’s birthday celebration. George perpetually vocalizes his disgust with Nina-Joy’s infidelity, with aggression that is the inverse of his character traits thus far. Nina-Joy is quite remorseful of her sins, it can be seen in her eyes. Yet, this is not good enough for George, even with a mature submissive act of foreplay to smooth things over. In order for their marriage to survive, Nina-Joy must allow George a free pass to commit adultery. Although indicative of the plot elements of this show, the cumulative hijinks of all of the show’s characters are not as absurd of a proposition as what George suggests. 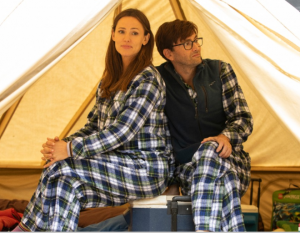 Kathryn’s ill-treatment of Walt and everyone else is beginning to vex the timid Carleen. While replenishing supplies at a local grocery store, Carleen and Walt share a moment of venting their ‘Kathryn’ frustrations, which will surely lead to the duo having a grand showdown with the series lead.  My reviews have been somewhat critical of Kathryn, but certainly not due to Jennifer Garner’s efforts.  Kathryn is a cold character, and such cynical characters need an attribute that resonates with a broad audience.  Kathryn’s backstory is a must for her antics and sterile demeanor to resonate with audiences. From my standpoint, her character thus far has solely served as a target for a few characters to hone their frustrations. Perhaps the showrunners will implement a short non-linear story arc to showcase Kathryn’s relationship with Walt, Carleen, and Nina-Joy, to show what went wrong between the husband, sister, and friend respectively.

The remaining characters continue their prescribed course of normalcy, with Jandice’s free-spirited attitude the most palpable. The chemistry between Jandice and the naive but loving Miguel is a plot point that dawdles between a mysterious love-affair and a sporadic story element that fills the allotted 30-minute time slot. As with Kathryn and Walt’s backstory, I am hoping to experience what led the paths of Jandice and Miguel to cross. A slow-burn is always welcomed over a spoon-fed storyline, but nuances are missing from many character traits in Camping.

As Girls explored how good people could be sub-par friends to good people in certain situations, Camping examines how good people can be sub-par lovers (emotionally and physically) to their partners. The seeds are being planted in Camping, but I am eager to see something grow. Particularly the beef between Kathryn and Nina-Joy needs to come full circle, for this may hold the key to why Kathryn is so cold to Walt and a nerve-wreaking sibling to Carleen.  With three episodes remaining, we can only wait to what truly makes the characters tick in this comedy series. Here is what is next: