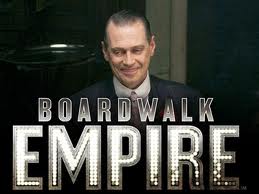 Terence Winter, executive producer and series creator of HBO series BOARDWALK EMPIRE, shared some news about Season 3 coming to HBO in the Fall.. In an quote at a Hollywood event he said “It’s New Years Eve 1922, going into 1923.  Things have gotten quite a bit more violent as Prohibition has gone on and people are running out of liquor. Hence Nucky’s world’s going to change.” Also, don’t forget, the role of the gangster looms larger and larger during that time period. Al Capone and the like are sure to be heavy players next season and that pressure should bear on Nucky Thompson as well. this slight peek at Season 3  was noted a Television Academy event in North Hollywood. Also present besides Winter were Steve Buscemi (Nucky), Michael Pitt (Jimmy), Michael Shannon (van Alden).Kelly MacDonald (Margaret), Vincent Piazza (Lucky Luciano), Gretchen Mol (Gillian), Michael Stuhlbarg (Rothstein) and Michael Kenneth Williams (Chalky White).  Collider also has a nice recap of the rest of the Hollywood meetup.

Of course, we all remember the climax of last season’s final episode. It was not only the death of Jimmy Darmody that shocked us but, also at whose hands it was brought on by. Terence Winter told the audience gathered that it was an inevitable course of action. “I knew it was going to happen, I just didn’t know when.” All is not done with the Darmody  family however as it was explained that the young,  now-orphaned son of the dead Jimmy will continue to be a part of the series.

Similar comments were made back in February to Huffington Post and are available on this site.  But, coupled with the teaser trailers and news bits like this one that surface, it make fans of the show that much more eager for the continuing saga of who rules the BOARDWALK EMPIRE.

What do you think about the jump ahead in time, Boardwalk Empire fans?  Horrible change? No big deal?  Leave us a comment below.