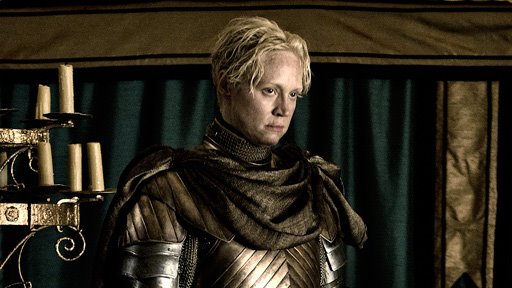 One underlying and prevalent theme found throughout the Song of Ice and Fire series is that loyalty comes at a hefty price. Bronn’s loyalty stems from a promise Tyrion had made to double any offer to betray the Imp that the swellsword may receive. Ned Stark, one of the most loyal men in Westeros, was betrayed by the very people he trusted most. Additionally, his best friend and king, Robert Baratheon, was betrayed by his own wife, Queen Cersei. Whatever the situation, loyalty seems to change hands due to power and greed. It’s a rather cruel part of the game and the people with the most to offer end up gaining the most power. It becomes extremely rare for an individual to come along with honor so profound that their loyalty comes without charge. Brienne of Tarth is one of these people. Her honor knows no bounds and her word is never broken. She lives for one thing and one thing alone: to valiantly serve those to which she has sworn her vows.

Played by actress Gwendoline Christie, Brienne is quickly on the rise as one of the show’s power characters. She hasn’t received a whole lot of screen time yet, but Christie has made every second count. Her dominant presence on screen, combined with her extraordinary devotion to the role, has really made this character shine. Even before casting started, fans were pouring in comments suggesting that Gwendoline get the part. It just goes to show how absolutely perfect she is for this role. 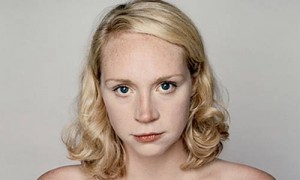 HBO didn’t just need a tall actress to play Brienne; they needed someone whose life experiences could match those of the complex character she would have to play. Originally an aspiring gymnast and dancer, Christie sustained a terrible back injury which ended her dreams. Undeterred, she decided to take up acting and has loved it ever since. The role of Brienne is a particularly special one to Gwendoline, as she can relate to the character on many different levels. Being 6’3” tall, Christie has been bullied and teased about her height and androgynous qualities, which made taking on the role extremely difficult. In order to fulfill the full embodiment of the character, she had to delve deep into the characteristics that made her the most insecure. She had to use her height as an advantage, cut off her blonde curls, and although she is a beautiful woman, portray a character with legendary ugliness. To her credit, Gwendoline has used these obstacles as a means of propelling herself forward as an actress and has made Brienne of Tarth a character to watch out for in the upcoming episodes.

Brienne, also known as the Maid of Tarth, is the eldest daughter and heir to Lord Selwyn Tarth of Evenfall Hall.  She had two younger sisters who died while still in infancy, as well as one brother, Galladon, who drowned when she was a child. These unfortunate circumstances caused her to become Lord Selwyn’s lone heir; prompting him to find a suitable husband. Her ugly and masculine appearance made this task especially difficult, however, and Lord Selwyn was only able to find three possible suitors for his daughter. The one person that came closest to marrying the Maid of Tarth was a fellow by the name of Ser Humphrey Wagstaff. The masculine nature of Brienne wasn’t appealing to Ser Humphrey and he demanded that she become more lady-like once they were wed. Only sixteen at the time, Brienne told him that she would only accept such a request from a man that could beat her in battle. Ser Humphrey walked away with broken bones and a broken betrothal. While visiting Tarth during his coming of age tour, Renly Baratheon crossed paths with Brienne. He treated her with chivalry and kindness and it was then that she fell in love with him. 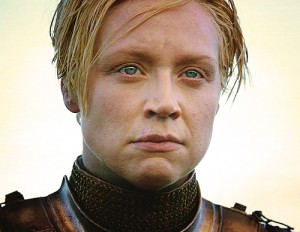 Brienne is loyal, stubborn, headstrong, and judgmental. Despite the repeated insults from knights, who mockingly call her “Brienne the Beauty”, she holds a simple idea of knighthood, believing that knights should be chivalrous and always honor their vows. She fell in love with Renly for his chivalry and treatment towards her, always being grateful for accepting her into his Rainbow Guard. Extremely proficient in combat, there isn’t a man in Westeros that would have an easy time cutting her down. As a result, Brienne yearns for respect, acceptance, and a chance to prove her valor in a worthy cause. She has an extremely ugly face with a masculine height and build. She has large, blue eyes with some saying that they appear trusting, while also showing her confidence in battle. However, her eyes are her only attractive feature. Brienne is taller and stronger than most men, extremely broad-shouldered, and has virtually no bust. She has a broad, coarse face with a nose that has been broken several times. Her mouth is too wide for her face, coupled with crooked teeth and plump lips that appear swollen. Her hair is the color of dirty straw, and her face is covered with freckles.

What I like most about Brienne of Tarth is her undeniable resemblance to Ned Stark. The comparable personality traits between these characters is endless, but Ned ended up dying for his devout loyalty and honest heart. The question that needs to be asked is if Brienne’s loyal and honest nature will be her downfall as well? Her loyalty never falters, and with what we’ve seen so far, she will gladly die to defend her beliefs. However blind to the true nature of knighthood she may be, Brienne holds a special, idealized version of it in her heart. It guides her through the most treacherous of times and the most heroic of journeys. She is a true knight, chivalrous and honorable. Her heart bleeds for those she serves and her loyalty comes without charge. Given the twisted nature of the show, it is evident that her values will soon be tested. Will she hold strong or will she give in to greed and temptation? I would bet on the former, but you have to always expect the unexpected when it comes to Game of Thrones.

Access Hollywood published an excellent interview with Gwendoline Christie where she talks about her role as Brienne, as well as her own personal difficulties adapting to it. It’s a really great read and you can check it out here. Please feel free to add your thoughts/opinions on this character in our comments section below.

UPDATE: After tweeting this article along with a few kind words Gwendoline Christie tweeted back a thank you that I’d like to share:

We love you Gwendoline! Keep up the awesome work and don’t let the boys push you around (as if they could..)!