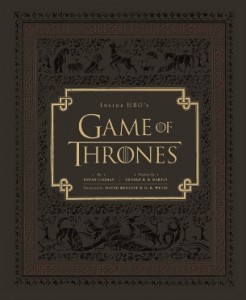 If you’re reading this review, there’s a good chance you feel exactly the same way I do about HBO’s Game of Thrones. But really, who can blame us? The epic fantasy series has literally been a magnet for attracting millions of willful souls into the massive sub-culture that surrounds George R.R. Martin’s A Song of Ice and Fire series. While most of us are chomping at the bits, eagerly awaiting the third season premiere on March 31, 2013, HBO has risen to the occasion and supplied fans with a juicy morsel of GoT goodness for fans to sink their teeth into. Of course, I’m talking about the newly-released official companion book for the show titled [amazon_link id=”1452110107″ target=”_blank” container=”” container_class=”” ]Inside HBO’s Game of Thrones [/amazon_link]Inside HBO’s Game of Thrones[/amazon_link].

Written by script-writer Bryan Cogman, [amazon_link id=”1452110107″ target=”_blank” container=”” container_class=”” ]Inside HBO’s Game of Thrones [/amazon_link]gives fans an exclusive, behind-the-scenes look at how the series brings George R.R. Martin’s beloved characters and powerful storylines to life. The 192-page book features hundreds of vivid color photos portraying action both on and off set, concept art, costume and set designs, as well as interviews with key members of the cast and crew. What the book does best; however, is tell how Dan Benioff and D.B Weiss’s incredible vision of turning the ASOIAF series into a television show became a reality.

Even before opening the book, an immediate sense of the overall quality is felt by examining it’s cover. The padding, the gold foil-stamped lettering, and the images representing Robert’s Rebellion are just a few examples what i’m referring to. In addition, the sigils for Houses Stark, Lannister, Baratheon, and Targaryen displayed on the spine further exemplifies the luxurious and stylish quality that is found on each and every page. The title gives an idea as to what this book is all about and what to expect inside. Basically, this book takes readers behind-the-scenes of the shows production by outlining the five main locations used from Martin’s novels and detailing key aspects that make it possible to create the world of Game of Thrones. Each chapter describes how the different sets are created and designed, the inspiration behind costumes, and told through interviews with the actors and crew members who make it all happen. 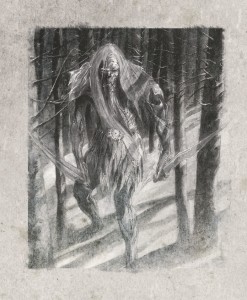 Broken up by region, [amazon_link id=”1452110107″ target=”_blank” container=”” container_class=”” ]Inside HBO’s Game of Thrones [/amazon_link]contains five chapters: The Wall, Winterfell, King’s Landing, Westeros, and Essos. Overall, the different chapters of the book are roughly organized the same way. Since each one covers a particular location, chapters describe the geographic regions through histories of the major Houses, how each location was created, concept art images, costuming, character profiles, how certain scenes were filmed, as well as interviews. What is instantly noticeable while flipping through each section is the high quality of the images and the gorgeous layout. If you like pictures, than this book is definitely for you because each page has at least one photo; with full-page spreads making frequent appearances. The images chosen include stills from the show, set photos, promotional photos, and behind-the-scenes shots of both cast and crew. Numerous bits of information that the average fan would never know, such as how they selected the perfect Weirwood tree for Winterfell’s godswood, are really what this book is all about. Along with insight into the production and design aspects of the show, interviews with the cast shed light on how the actors interpret the character they play.

Interviews with actors that are rarely heard from, such as Harry Lloyd and Conleth Hill, are a major plus for the book. Lloyd, who played Dany’s arrogant and insensitive older brother Viserys, gives his thoughts on the “Crowning of Viserys” scene, and explains why the sound of his golden head clanking on the ground was his favorite part. Actors for key characters are also interviewed in-depth throughout Cogman’s book. What’s most interesting are the actor interpretations of their character’s personalities, which are mostly found in the numerous character profiles. Each profile consists of a brief bio as well as quotes from the show’s writers and the actors themselves. One profile I found particularly interesting was on the three youngest Stark kids, sans Rickon. The talent level of these three young actors is truly extraordinary and this brief section provides great insight into the minds of Maisie Williams (Arya), Sophie Turner (Sansa) and Isaac Hempstead-Wright (Bran). Most die-hard Thrones fans have probably heard most of these quotes before, but it’s still something that all fans can appreciate. 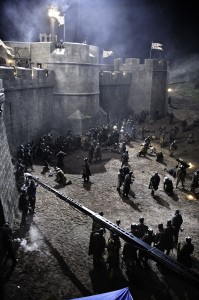 Production information pertaining to set designs, costuming, and filming some of the most memorable scenes from the first two seasons are presented through the use of concept art and set photos. Of course, writers and producers are the ones who share what goes into developing each and every aspect that is presented. Michele Clapton, who won an Emmy this year for her work on Season Two, describes her inspiration for some of the costumes used on the show. The costume sections are brief, but still great information that most fans probably don’t know.

By far, the most interesting parts of the book are the detailed accounts of how some of the most famous scenes from both seasons were created. Including the “Prologue” scene from the premiere episode, “Ned’s Beheading”, “Crowning of Viserys”, “Battle of the Blackwater”, and “The Birth of Dragons”, the book shares wonderful insight about how each scene was filmed. Each scene is accompanied by a full two-page spread with a beautiful screenshot. Probably the most exhilarating and awe-inspiring scene from Season Two, “Battle of the Blackwater”, Cogman’s book delves into the process of creating the bloody conflict that ensued outside the gates of King’s Landing. My absolute favorite concept art image is found here, a dark depiction of Baratheon forces disembarking their small boats onto beach with the aftermath of the wildfire explosion clearly visible in the background. Other extremely cool images, such as the giant ship set from Linen Mills Studios and set photos from the battle itself, make this one of the great sections of the book. 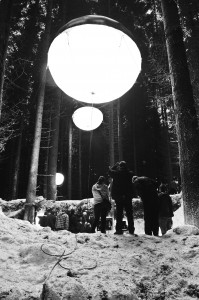 Personally, I think Bryan Cogman was the perfect guy to take on the job of putting this book together. I’ve never had the pleasure of of meeting or talking to Mr. Cogman, but from what I understand, he is an extremely talented person and all-around good guy. Not mention a hard-worker, and it shows when you look through his book. The layout is great and the high quality photos definitely make it a beautiful book to look at. One complaint I do have about the pictures is that they are mostly stills from the show or promotional images that I have seen before. However, having the high-quality gloss pictures spread across a full page of the book is definitely better than looking at them on a computer screen. Additionally, the costume designs and concept art felt a little underused. They were indeed wonderful to look at, but I would rather see storyboards and concept art than stills from the show that I have already seen.

Also, another complaint of mine is that there is not a single map to be found anywhere in the book. Since each chapter covers a specific geographic region, it would seem fitting that a map would be provided to see where each location is. Of course, most fans who have read the books will already know where they are, but that brings me to another concern. Most fans who have read the books already know about the histories of major Houses and the backgrounds of key characters. In that case, this book doesn’t provide much for them. However, the actor insights into how they view their characters, and the behind-the-scenes descriptions of how sets are designed and scenes are filmed is interesting information for any fan and make it enjoyable for both readers and non-readers.

Probably the most interesting part of the book comes at the end in a section called “Game of Pranks”. What was supposed to be an annual tradition, David Benioff and D.B. Weiss added some interesting components to the scripts for Jon Snow and Theon Greyjoy. Let’s just say that the script changes would definitely test the actor’s patience, and possibly cause some tension on set. These stories have been told before, but now the pictures of the actual script pages are included in the book.

Overall, the book truly is gorgeous. The material and photos are presented extremely well and provides new, interesting information for fans. There are new behind-the-scenes pictures that haven’t been seen, and the costume designs and concept art are enjoyable to look at. The interviews are full of insightful content that most fans probably don’t know and having all this information in one place is definitely nice. Since filming for the third season will be wrapping up soon, it will leave months of virtually no news for the average fan to get their GoT fix until the Second Season comes out on DVD sometime early next year. However, this book is the perfect collectible for any fan who desperately needs something to tide them over as we all gear of for the premiere of Season Three.

Special thanks goes to Chronicle Books for supplying HBOWatch with a copy of this book to review. Anyone wishing to purchase a copy of Inside HBO’s Game of Thrones can do so at [amazon_link id=”1452110107″ target=”_blank” container=”” container_class=”” ]Amazon.com[/amazon_link].