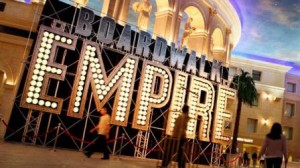 A large Boardwalk Empire sign stands in the lobby of Caesars Atlantic City Hotel and Casino in Atlantic City. With critics hailing the HBO series set in Prohibition-era Atlantic City as perhaps the best of the fall TV season, the 12-episode series will keep Atlantic City in the nation’s consciousness far longer and better than any ad could.
Fans of the HBO series “Boardwalk Empire” can pose for a photo op on the Atlantic City boardwalk. Officials on Monday unveiled a 180-foot long facade in front of the West Hall of Boardwalk Hall that’s a re-creation of some of the TV series’ sets. The facade was created by a billboard company and features special anti-graffiti paint. The facade was the brainchild of radio personality and Atlantic City Press columnist Pinky Kravitz. The newspaper reports the Atlantic City Special Improvement District will station an employee nearby to keep the facade safe. (Associated Press)