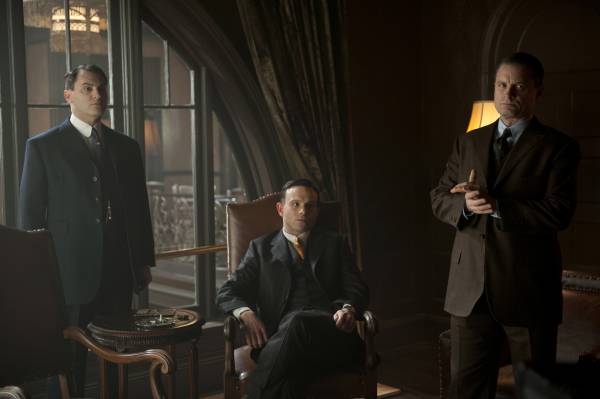 All of man’s troubles come from his inability to sit quietly in a room by himself.

The wise words of Arnold Rothstein act as a motif of sorts for Boardwalk Empire, and echo through New York Sour in particular.

After segueing back into the lavish world of 1920s Atlantic City via the familiar sound of The Brian Jonestown Massacre, we rejoined Boardwalk Empire for the premiere of its fourth season, and boy, did it deliver. Seeing these characters again is like revisiting old friends, and the eight month time jump between seasons provides an opportunity to catch up with them, before following them forward. As season premieres go, New York Sour followed a familiar formula, in reestablishing the characters and plotlines (as well as resolving some outstanding issues from season 3) before moving forward. Unlike many premieres, it was actually quite gripping in its own right, and a stellar beginning to what we hope will be another great season.

The first we see of Nucky is in a peace-brokering meeting in his isolated, not-so-luxurious residence, the Albatross Hotel. Aside from the ridiculous notion that it took eight months for such a meeting to occur, this was a great scene. While short, it pitted some of our favorite, and most powerful characters on level ground. It’s refreshing to see Nucky and Eli so close after the explosive events of last season, closer now than they were during the first season of the show. This bond is evident throughout the episode, and I hope their mutual trust continues. A noticeably more composed Luciano speaks with an even voice to Masseria, no longer a mere subordinate. The apparent respect in their relationship directly contrasts with that between Capone and Torrio. In addition, Lanksy seems almost a miniature version of Rothstein. Despite not having much to say, his presence is felt. I am no expert on the subject, but I do understand that Arnold Rothstein characteristically wore a bow tie in real life. This is the way he has been portrayed so far in the show. Why then, in New York Sour, is he sporting a traditional tie? This is a minor nitpick, but it was noticeable, and it’s difficult to imagine that such a mistake could be made in a show with such excellent costuming. Rothstein aside, the most striking aspect about this meeting is that the different factions are now divided strictly by ethnicity.

The Onyx Club seems to be fully functional, with Chalky obviously taking his new position very seriously. I thought it mildly amusing that Eddie Cantor be present (and a tad more morose) after the chilling audition he went through last season at the hands of Chalky and Dunn. His new protégé predictably turned out to be a teased love-interest for Nucky, yet the twist involved showed us how Nucky has changed as a character. After naively making her ambitions known, Nucky wastes no time in having Eddie escort her out. Margaret’s departure and Billie’s death have obviously had a profound effect on Nucky, and it will be interesting to see how this characteristic develops. As an aside, it’s great to see Nucky finally respect and appreciate Eddie. All in all, Nucky now seems to be much more grounded in his outlooks and practices.

Speaking of practices, Dunn was involved in one of the more disgustingly amusing scenes of the episode as he was coaxed into a sinister sex fantasy by talent manager Dickie and his wife. Erik LaRay Harvey is superb here, and I’m sure his exasperated delivery of “Pulling up my pants!” had more than a few heads rolling. Infuriated by Dickie’s obnoxious racism, Dunn takes a bottle to his head in one of the most visceral attacks since Jimmy and Richard’s scalping of Mr. Parkhurst. This leads into another scene in which Chalky hilariously stretches Dunn to the limits of his patience as he disposes of Dickie’s body. I am a fan of this new focus on Mr. Purnsley, and Erik LaRay Harvey has added some much needed nuance to the character. Here’s to some more development of Purnsley down the line. 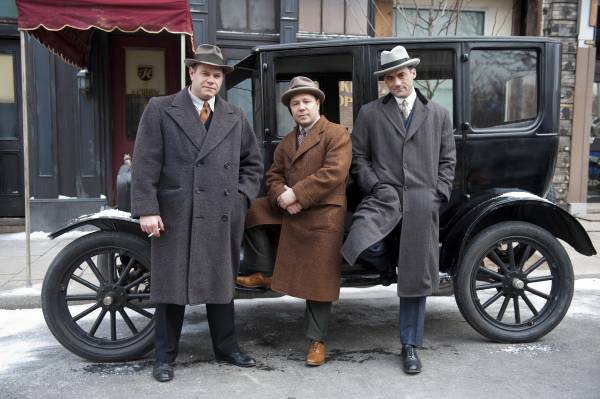 Factotum. Capone showed shallow shades of Gyp Rosetti’s inferiority complex this week as he was misrepresented by the press and given a schooling by his brothers. Frank and Ralph Capone are respectively played by Morgan Spector and Domenick Lombardozzi. Lombardozzi will be instantly recognizable to HBO veterans as Herc from The Wire, and it’s nice to see him retain some of that innocent charm in his portrayal of Ralph. Al is obviously struggling to remain subordinate to Torrio, and it doesn’t help matters that the latter is given the limelight at the expense of “Caponey”. Despite his brothers’ advice that the focus on Torrio keeps him in the clear, Capone craves notoriety. Capone’s rise to power is one storyline in particular I look forward to. Considering what historically happened to Frank Capone in 1924, this arc has the potential to get very interesting.

This week we got no van Alden, but we did get a (final) dose of Stan Sawicki. The shotgun trap served as a literal embodiment of Chekhov’s gun, and with it we bid adieu to the corrupt and grossly dislikeable agent. His departure paved the way for Brian Geraghty’s disturbingly creepy Agent Knox to enter the fold. His characterization during this episode was actually quite sinister, as the naive young buck becomes the cold, shrewd professional. How he will interact with the other players is up in the air right now, but it certainly won’t be a mutually positive relationship.

Speaking of relationships, we were shown the epitome of two polar opposite family situations during New York Sour. On the one hand we have Eli, who, despite his immoral day to day doings, has always been a loyal husband and a supportive, loving father. He obviously cares dearly for his family, especially his eldest son Willie, who is now played by Ben Rosenfield. At first, it was very unclear as to whether Willie had been recast or another of Eli’s sons had suddenly sprouted. The recasting is slightly disappointing if only because Willie was focused on a lot in the latter half of last season, but now has to be reestablished. Nevertheless, Rosenfield has set a good impression, and it will be interesting to see if he stays on the noble path Eli and Nucky wish for him. On the other hand there’s Gillian. Gillian has always been a disturbing character to say the least, but after the death of Jimmy her life has been plummeting downhill at breakneck speed. Inadvertently thanks to Gyp, she is now a heroin addict, and her addiction spills over into the fact that she is still prostituting herself for much needed money. It is here that we get our first glimpse of Ron Livingston’s Roy Phillips, an executive of Piggly Wiggly. Livingston is an old hat at HBO shows by now, having appeared in Band of Brothers, Game Change and Sex and the City, and his character’s implications are intriguing, at the least. I do wonder when we will see the resolution of Tommy’s custody, and whether the Sagorsky family will play back into Harrow’s story. It seems inevitable. 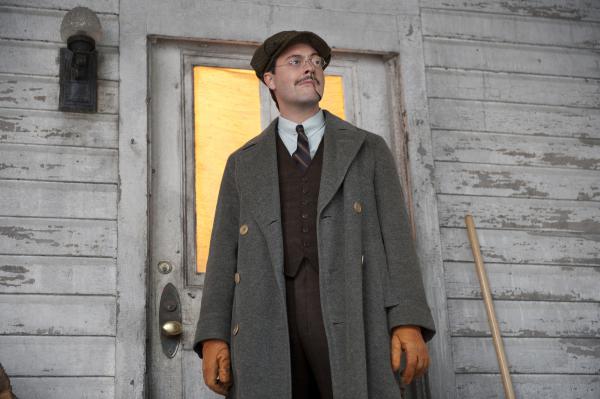 Another relationship which has finally come full circle (almost), is Richard Harrow’s return to his sister Emma. Harrow stalked through the episode at different intervals, and while every scene involving Jack Huston is immediately great, I did think the purpose of his murder spree was quite confusing. Was he mopping up loose ends before visiting Emma? Will the significance of his murder of the president of the Old Mission have repercussions down the line? Wisconsin was mentioned, but how will this tie in with the larger narrative? Patience is the key, as with all episodes of Boardwalk Empire. This show is a slow burner, and can only be fully appreciated when watched in full as a novelistic season, of which each episode comprises a chapter. Hopefully the next chapter will be equally as gripping, if more forward-moving, and we can have our due dose of van Alden, newcomer Dr. Narcisse, and more Rothstein and Luciano.

Join us then for Resignation.  Here’s a preview: