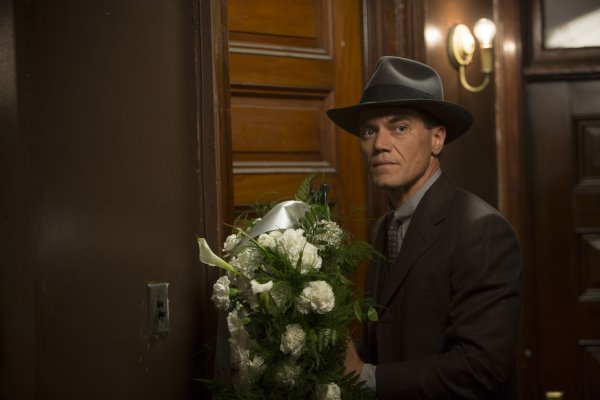 A lot of people are struggling, both personally and professionally, as evidenced in this episode.

Chalky is convinced (and rightfully so) that Dunn Purnsley was acting on the behest of Narcisse. Narcisse seeks to crucify Chalky by any means. I don’t know what bothered me more – that Chalky was being lectured by Nucky or that Nucky was not showing any respect to his old friend, who when times were very tough, came to his aid. I don’t like the way Nucky was being a bit of a jerk to Chalky. I get the moral undertone – he doesn’t want Chalky to be explosive and get out of hand or let some distraction, such as the lovely Miss Daughter Maitland, to cloud his judgement. We all like seeing more of Chalky and we want to see Chalky exact his revenge on that monster, Narcisse.

Meanwhile, over at the Mueller residence, George and Sigrid are encountering money issues and home renovation hell. George is uptight and frustrated and with good cause. He has to put up with O’Banion’s constant snooping and condescending treatment as well as deal with the hotheaded Capone brothers. You’re almost tempted to say, “Can’t this poor guy catch a break?” Off he goes to work, promptly goes on another delivery, only to end up with the Capone’s and get slapped around. This time, George gets a bit of backbone by saying, “Hit me again and you will regret it.” A man can only take so much before snapping.

Arnold doesn’t seem to be faring well, either. He is preoccupied and with very good reason – his money isn’t rolling in as it used to. That would keep me up at night, given the fact that he had flush pockets throughout the first three seasons. Things are not going so well. You know you’re desperate when you want Nucky to help you out with your cash flow problem by selling a life insurance policy. Oh, it just happens to be for Mickey Doyle. Later, Nucky has Eli come by for a chat. The topic: what to do about Chalky, as he is becoming problematic and volatile, in their respective opinions. The talk took a turn for the weird when there was a prolonged silence between the two of them, right after Eli asked, “Is there anything else I should know about?” Aw, geez. I really hope Eli does not sell out Nucky to that prohee jerk!

A wedding should be a happy time for any family, right? Over at House White, the temperature between Lenore and Chalky is icy, at best. You can tell by the quality of her silence, that she is upset with Chalky, although she has not made a scene in front of the kids. After all, when we see her polishing the silver and putting out the fine china and flowers for the future in-laws, she cares about setting a good example and portraying a polished appearance on the outside. Status is something that Chalky has also craved for some time now; from his own people; his family and of course, white people. All the wedding planning and flowery talk in the world can’t save this sinking ship. The son doesn’t want to know what is going on but the daughter makes it a point to want to find out. (And she finds out, alright, but that will be a few paragraphs down.)

Julia and Gillian have their respective says in court, both pleading their cases to the Judge. The Judge points out that Julia is not married and that in most cases its best that a child is placed with a blood relation. We see Gillian become a tad worried, once Richard walks into the courtroom. I don’t think she counted on seeing him again and he could totally blow her cover about what kind of lifestyle she was leading and what Tommy was exposed. Julia also picks up on the fact that her father is dying. I almost found it comical and endearing that Julia was very straightforward with Richard and said, “You might do in a pinch.” Wow, talk about a blunt, unsentimental proposal…and usually it’s the man who does the proposing. But I like Julia and her forward thinking ways. I want to see these two lonely souls stay together and create a happy life for each other and for Tommy. A happy moment, indeed.

George gets attacked by his previous employers and it comes to the breaking point – he snaps after repeatedly telling the men to stop and pulls out his gun. They frantically plea for mercy and tell him to relax, only to hear George say, “I am relaxed.” George promptly fires three shots and kills all three men and walks off. He gets more grief at home when his wife asks him about his appearance and why was it that he was robbed. Tired, frustrated and impatient, he snaps, only to have the Capone’s show up and tell him that he has to tend to the business of “taking care of Mr. O’Banion.”

Narcisse sits in Daughter Maitland’s room, questioning her over and over again about the events of that fateful night that Purnsley was murdered. She tries her best to be a convincing liar and it comes to a head – Narcisse exacts his sick method of ‘discipline’ by beating her so violently.

Back at the White residence, the mothers are all set to make the seating arrangements for the wedding when Chalky receives a call from the club. Maybel answers it and tries to take a message but it is urgent enough that it requires his immediate attention – and we all know why he’s been called. What he sees back in Daughter Maitland’s room fills him with a violent rage. What is absolutely sickening is how Daughter tries to justify the violence that’s been done to her. She has a sick, twisted relationship of codependence, almost like a Stockholm syndrome. How can cooler heads prevail when you see your mistress completely beat up, and by the man that you loathe more than anything else in the world? 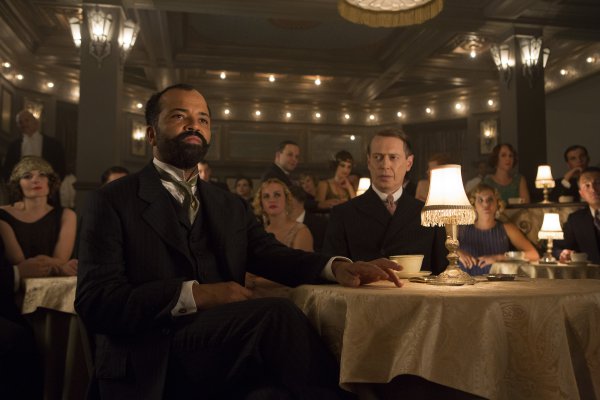 Nucky is sitting in the Onyx Club when Narcisse comes in, sits with him and talks smack about Chalky. Naricsse is a monster, plain and simple, disguised with a title of “Doctor” and spouting the lines from the bible. An implicit threat is made against Chalky and Nucky doesn’t like it. Of course, you just know that something is going to happen in the Club. Chalky shows up and challenges Narcisse. Narcisse just taunts him. Chaos ensues – the band strikes up a chord, the dancers go on stage but Chalky provides the very final act – he overturns the table that Narcisse sat at and storms out. Before leaving, Nucky told Chalky to watch what he was saying and where he was saying it. It really bothers me that Nucky isn’t really being mindful of his friendship with Chalky. He owes Chalky a great deal and what ends up happening – he tells Chalky the next fight he picks, he’ll be fighting it alone, well, I’m a little peeved. I understand that there is a time and place for things, but there’s also a little thing called friendship and loyalty.

O’Banion begins to taunt George and George coolly and eerily tells Dean his past. He tells him what he’s done in the past and the callous details – he’s killed his ex partner, he was an ex prohibition agent and he killed three men that were beating up on him. Hell, he evens tells Dean that his actual name isn’t George, it’s Nelson. He isn’t legally married to his wife and he just doesn’t care anymore. What happens next is a shocker – Dean gets assassinated by three men. Nelson was in the back – fortunately for him – and when he hears the shots, he comes out and assesses the scene. He takes the money and leaves.

Nucky and his driver are back at the Albatross. It’s foggy and the air is thick with tension. Nucky says to get some extra men for protection when out of the shadows, Richard appears and comes to see him. Richard tells him he got married and would like to have a job. I don’t know about you, but if Richard Harrow was in my employ, I’d feel a lot better!

Nelson returns home with a gun in his belt and a thick wad of cash. Apparently, he is in an amorous mood. He demands that his wife listen to what he has to say, with all his questions. He throws the cash into the air, tells Sigrid to get naked and well, I guess we could say that Nelson finds a productive way to relieve his, err, um….”tension.” 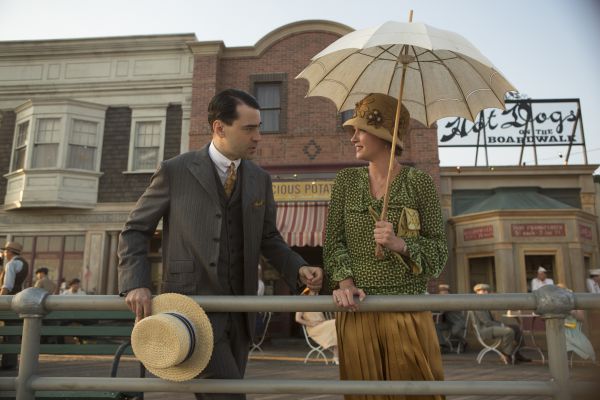 But what is going on with the guy that Gillian is seeing? I don’t understand his angle. He’s secretive, on the phone, dodging questions from Gillian. Gillian is preoccupied and longing for a hit of heroin but she switches gears and says she must stay strong. He tells her that the decision now rests in the hand of a Judge and she must prepare for a worst case scenario situation. But what is he playing at? What is it he’s hiding?

So Maybel discovers her hunch was right about her father all along. She sees Chalky at Daughter Maitland’s apartment. It’s no use, no matter what excuse or reason Chalky tries to utter, Maybel leaves hurt and upset.

At the end of the night, Nucky calls Sally. They talk about the weather and a few other matters. Nucky ponders what it would be like if he were to consider moving to Florida. Sally is pretty blunt – come down, don’t come down, business is business. She doesn’t look like she’s the type of woman to be waiting by the phone for a man and do nothing else. “Don’t get lost in the fog now.”

Powerful words – it seems that so many of the characters were lost in their own fog this episode. Chalky and his anger towards Narcisse; Nucky being frustrated and telling Chalky to think before he acts or he’ll find himself alone; Julia being alone and wanting to get married; Jillian wanting custody of Tommy; Nelson getting to the boiling point and expressing rage; the Capone’s wanting revenge against O’Banion at any cost; Naricsse being so sinister he wants to eliminate Chalky by any sick means at his disposal and Daughter Maitland, for accepting the violence that’s done to her as a form of righteous punishment. The only person who seems to have their head on straight (so far) is Sally. She’s forthright and not surprisingly, sleeps with a shotgun by her side. Business is business.

And if business is business, then why are so many people not able to keep business and pleasure separate?! The end result will be destruction and ruin.

Have something to say? Comment below! Here’s a preview for next week’s episode, White Horse Pike.