This week’s Boardwalk Empire took its time and carefully tracked three main plot threads, paving the way for next week’s season finale. Chalky and Daughter are still on the run, Eli is still betraying Nucky, and Gillian… Oh Gillian, you brought this one on yourself, but I feel so bad for you just the same. Take a deep, cleansing breath and let’s recap this week’s episode, Havre de Grace.

Chalky and Daughter: Chalky has hitched another ride, this time to see someone named Louis Gossett Jr. as Oscar– who hopefully won’t shoot him. Apparently Louis Gossett Jr. as Oscar took Chalky under his wing at one point and taught him everything that he knows. This means Louis Gossett Jr. as Oscar is going to die before the episode is over. DON’T FORGET THIS IS LOUIS GOSSETT JR. WHATEVER YOU DO. I think it’s supposed to make up for the fact that most of the Chalky scenes in this episode felt like two xanax bars and an ambien– not that I would know what that feels like. I’m just guessing. 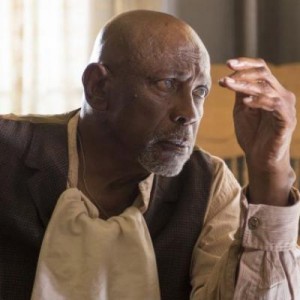 Most of Oscar’s advice is never trust white people– he doesn’t trust browns, either, but he really doesn’t trust whites. He doesn’t like Chalky’s choice in female traveling companions or just about anything else Chalky says or does. A lot of this gets pretty boring– sitting around playing checkers, watching the couch starring Louis Gossett Jr., and crickets. I have to be blunt, too… In addition to struggling to stay awake during these sequences, I had to turn on the closed captioning to understand the dialogue. There was way too much of nothing going on with Chalky and everyone was mumbling.

Anyway… after a frank discussion, Chalky realizes how messed up Daughter’s relationship with Narcisse is, and he knows that she’s only a couple of steps away from being as messed up as… oh, say, Gillian (we’ll get to Miss Darmody in a minute). Daughter decides that their relationship can’t continue, and leaves in the middle of the night. Chalky is upset when he wakes up and finds out that Louis Gossett Jr. as the Old Man on the Couch didn’t stop her, but they don’t really have time to talk about it because they hear a noise outside. Narcisse’s men have found them. Louis Gossett Jr. is shot dead (I predicted this!) but Chalky and Louis’s pals kill the men Narcisse sent to get him. 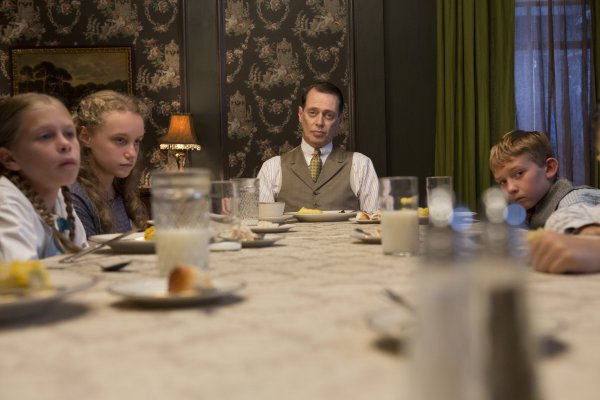 Nucky and Eli: Gaston Means calls Nucky to try to sell him the information about Eli ratting him out to the FBI. The Feds are breaking down Gaston’s door and he just keeps raising his price. At that point I would have traded the information for good legal representation rather than getting Nucky all agitated, but I’ve never negotiated with a gangster before, so what do I know? Anyway, at the end of the call, Gaston has been arrested for perjury and Nucky knows there is a skunk in his cellar– he just doesn’t know who.

Eli now has diarrhea of the mouth and seems to be telling everything he knows to Agent What’s His Face. Knox? He has some other name, but I can’t keep track any more. Knox threatens Eli to get him to cooperate in catching Nucky in the act of plotting to do stuff across state lines. I need something to blow up in Knox’s face, because it’s too late for the writers to make me feel sorry for him, and I’m really upset about Gillian. He had better end up taking out the trash at the county sheriff’s office or something.

Somewhere in the middle of all this, it was decided that a Thompson family summer holiday was in order, so Eli’s bunch pile into the car and they ship out to Nucky’s place on the beach. When Nucky laments that there is no peace, and is upset about Narcisse telling him what to do, Eli suggests a meeting with Florida and New York to smooth things over– the meeting where Knox wants to catch all of them. Nucky bounces some of his “skunk” suspicions off of Eli, and he disputes all of them. The Eli snaps when wife June mentions how Knox got his goat when he posed as an insurance salesman at the house, and I mean he really snaps.

“June, just shut your goddamn trap for once. Okay? Just shut it.” That, along with June’s description of the insurance agent as a blue-eyed, baby face type, gets Nucky’s attention. Nucky knows Eli is a rat– but is he going to realize how much of a rat he is in time to keep out of trouble with the feds? Willie shares his concerns about Eli being on edge with Nucky, and June tells Nucky about Eli’s heavy drinking. How many more red flags does Nucky need? He tells Eli he wants to do the meeting– you know, the one where Knox is going to catch them all. *headdesk*

Later, Nucky is talking to Sally on the phone, and tells her he wants out. The question is can he get out with only one episode left? And what will he do to Eli when he figures out his brother has betrayed him again?

Gillian and Roy: Gillian is still struggling with the sale of the Commodore’s house and with the custody battle for her grandson Tommy. As she consults her lawyers, she comes to some difficult decisions about Tommy, the house and letting go of things. When her custody lawyer mentions a children’s institution that apparently mistreated her, I think that’s when she decides it’s not worth risking Tommy ending up there too. She goes to visit Tommy– quite sober this time, and of course Richard nearly flips out. She’s really only there to say goodbye, though. She gives Tommy Jimmy’s dog tags after some tense words with Richard. She asks Richard to take care of him and walks away, not looking back, essentially accepting that she won’t be getting Tommy back. She happily announces to Roy that she is selling the house to the current buyer and is no longer going to fight for custody of Tommy. He’s happy for her, but he’ll be leaving town soon. He asks her to marry him and come with him. Gillian is delighted. 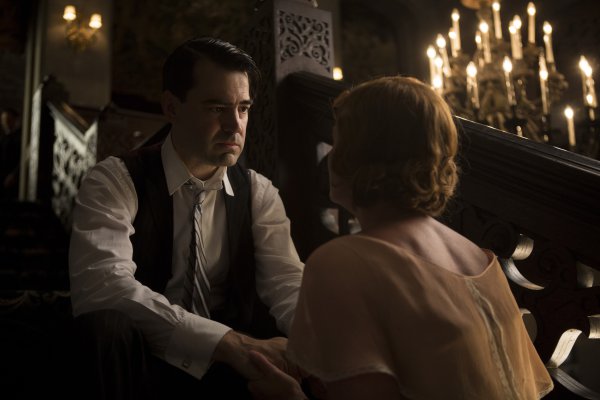 But if you think this has a happy ending, you haven’t been paying attention.

Gillian and Roy are making happy plans for the future in a parking garage when a former associate of Roy’s appears to confront him. He blames Roy for losing his job, and reaches into his jacket. Roy thinks he is reaching for a gun and shoots him. Gillian urges Roy to leave because no one has seen them and no one needs to know. Back at the house, Roy doesn’t know how he can possibly live with himself. Gillian tries to reassure him, and tells him how she lives with having drowned the young man in the bathtub to fake Jimmy’s death. But Roy isn’t living with anything. Roy is with the Pinkerton Detective Agency. He and his associates– and Gillian’s longtime personal lawyer– have all just been witness to her confession to first degree murder. She is dragged away kicking and screaming as Roy looks on. He may actually be regretting what he had to do. Nevertheless, it appears to be the end of the line for Gillian. 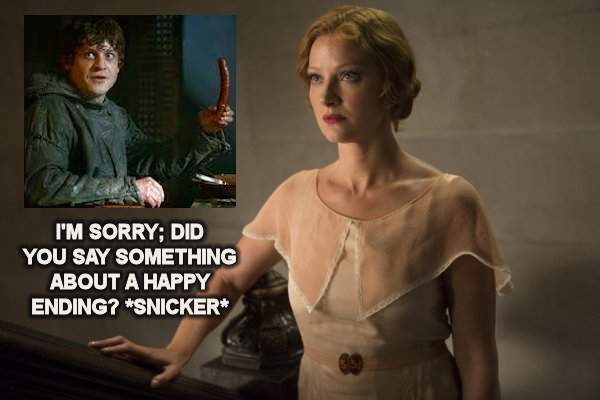 Gillian’s Trauma Conga Line: You can argue that Gillian got her comeuppance being arrested for murder, but I can’t help feeling sorry for this character. After seeing that, my heart was just not in this review (you can tell by the lack of snark) and I kind of felt gutted. I knew the other shoe was going to drop on her sooner or later this season, but when it did it didn’t hurt any less.

Gillian has done horrible things– there is no doubting that– but she has also had horrible things done to her, starting with Nucky picking her out of the crowd for the Commodore to rape at the age of 13. She was an orphan who had most likely already been physically and mentally abused prior to that. After the trauma of sexual assault, she had a baby when she was very young. Over the years people probably tried to take Jimmy away from her, men came along breaking her heart and taking advantage of her– just one awful thing after another.

While that doesn’t excuse sleeping with Jimmy or murdering Roger, there was something sickening about how Roy straightened her out and made her the happiest she’ll ever be only to yank that out from under her like that. I felt like she had atoned for the things she had done and was willing to leave the past behind her. I know a lot of people don’t like her and will be glad to see her go to prison, but I can’t help but wish she could have had her happy ending. Unless they’re going to get her out of prison somehow, this will probably be the end for her character.

Gillian will answer for her crimes, but no one is ever going to answer for what they did to her. Having been through the trauma conga line myself, I understand her too well. I don’t want to go to prison with her. Either let her off on a technicality or take her off the show. We’ve both had enough.