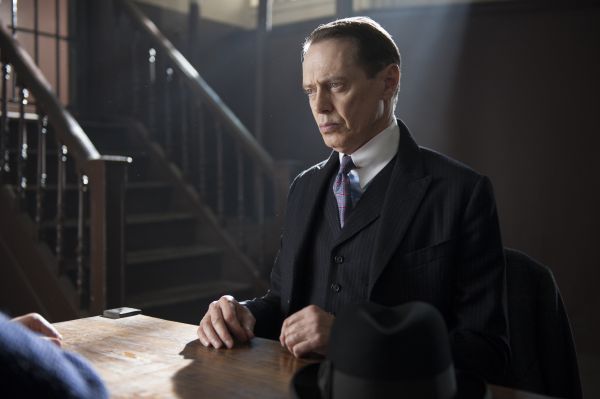 “All you can count on is blood.”

Family and vengeance were the driving themes in this week’s episode of ‘Boardwalk Empire.’ The poem ‘Erlkönig,’ as explained by Eddie and Agent Knox, depicts a child and father riding through the woods on their way home. The son begins to tremble in fear of supernatural beings in the woods but his father assures him that all is well. At poem’s end, the son has died in his grieving father’s arms.

Al and Frank. Gillian and Tommy. Nucky and Will. Van Alden’s search for respect. Eddie and his past life. Like the father loosing his son in ‘Erlkönig,’ many of our characters suffered similar losses this past Sunday. 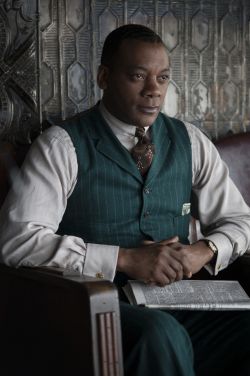 Gillian Darmody’s life continues to spiral out of control. Her heroin addiction has brought her to her knees – quite literally in her meeting with the judge overseeing her custody hearing, and yet again with her brief exchange with Dunn, who is absolutely lighting up the screen this season. Every scene brings Gillian a little lower and adds yet another track mark on her blistering veins. After her failed seduction of the judge she finds herself being dragged from Tommy’s school in a sad attempt to bring him “home.” Gillian wakes up in Roy Phillips’ bed, who’s been avoiding her like the plague all episode. Her confession is a mixture of sincerity and manipulation. One thing that remains consistent with Gillian’s character over these past 4 seasons – she’s a survivor, by any means necessary.

Nucky spends this episode in Philadelphia trying to clear Willie Thompson’s name from the murder of his “buddy” Henry. After meeting with the Philadelphia District Attorney it becomes clear that Henry’s parents are powerful people on a witch hunt for answers. After hearing Willie’s confession Nucky finds himself sympathizing with his nephew, delivering a memorable speech on family, duty and blood. “Every now and then you’ll think of the boy whose face you can’t remember” perhaps referring to the ghost of Jimmy Darmody. In the end Willie’s roommate, Clayton, takes the fall, and Willie finds himself further intertwined with the family business.

Nelson Van Alden’s gangster persona reaches a crucial turning point in this episode. It’s election day and Van Alden has been given command to sway voter opinion with clubs and fists. Van Alden and the Capone brothers, Al and Frank, find themselves vastly outnumbered at the Western Electric voting yard. The battle is a crushing defeat for the Capones, ending with Chicago detectives emptying their clips on Frank, a death that can be compared to Sonny’s demise in ‘The Godfather.’ Al has been teetering on the brink of insanity for the past few episodes. With Frank dead we’ll see how he takes his vengeance on the Chicago Police.

Agent Knox of the Bureau of Investigation has Eddie on the hot seat. After being arrested at the end of last week’s episode Eddie is put to the question with mental anguish and physical beatings. Agent Knox continues to showcase his prowess as a dangerous opponent. As former army intelligence, Knox digs up Eddie’s past life in “Prussia.” We learn that Eddie abandoned his family after stealing money from a shop he worked at and fleeing to America with his mistress. His mistress would later leave him and his sons changed their last name to hide their shame. The ‘Erlkönig’ poem finally breaks him. Eddie admits to giving money to Ralph Capone at the behest of Nucky Thompson. The betrayal is too much for Eddie to bear. He folds his clothes, dresses well, writes a letter, then leaps from his window to his death.

There were many shocking moments in this episode: Al Capone receives a vicious beat down. Frank is pumped full of lead. Willie betrays his friend and roommate. And lastly, Eddie leaps to his death. It’s sad to see Eddie gone but his death continues to showcase the deadly price of ambition in the bootlegging world. He wanted more responsibility, more respect, but he wasn’t prepared for the costs of failure. His loyalty to Nucky was seeded out of disloyalty to his family. After he betrayed Nucky he realized he had nothing left.

Every season has it’s memorable moments. I think Nucky’s speech to Willie on family and “blood” is one such moment. “He thought he was better than me. But he wasn’t.” Perhaps Nucky sees a bit of himself in his nephew. Although he was there for Willie in his hour of need, this is one more thing to pile on the list of conflict that’s hovering over Nucky’s head: His dealings in Tampa. His shaky relationships with Arnold Rothstein and Dr. Narcisse. And now the secret coverup of his nephew’s murder case. The future is looking dark for Nucky Thompson. But as Mr. Means so eloquently put it last season – “Ordinary men avoid trouble. Extraordinary men turn it to their advantage.” 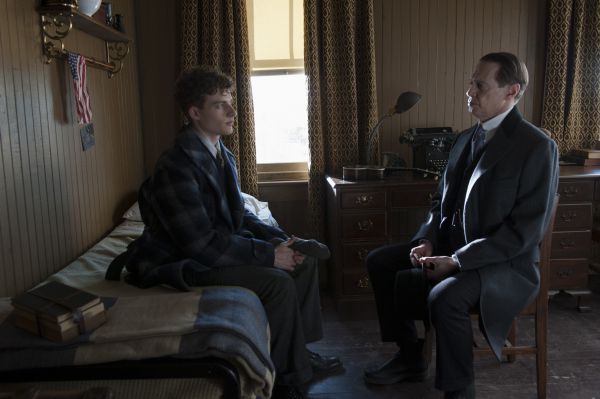 One of my main critiques of this episode, and this season as a whole, is that things are so ambiguous that it’s hard to make out what the objective of this season really is. These past few episodes have heavily featured Willie Thompson, who I’m sure will play a major factor down the road. But what about all the other characters and how they relate to the main plot of the season? Dr. Narcisse spends this week on the sidelines. There’s been no word from Rothstein since his poker debacle. No new developments in Dunn’s overthrow of Chalky. And nothing new coming out of Florida. I know, I know, be patient. Things will certainly come together with time. Next week marks the midpoint of Season 4 so I’m sure things will start to boil over.

Don’t get me wrong; this was a great, insightful episode. I think it’s safe to say that we’re all growing a little anxious for things to come together. This is nothing new to the ‘Boardwalk.’ Winter and the writing staff love to keep the audience waiting till the last minute. Be patient. If you’ve followed ‘Boardwalk’ from the beginning then you already know what I’m talking about.

P.S. – What happened to Margaret? Do you think she’ll be returning this season? Leave your thoughts in the comments section below.

In the meantime, here’s a preview for next week’s episode: