Distracted by the government shutdown, the watchers forgot to watch what they were supposed to be watching. The weekend is approaching fast, so let’s catch up on the best gangster show on television before we fall behind. Here’s a recap of last week, in case you missed it:

Making the First Powerpoint Presentation at the FBI 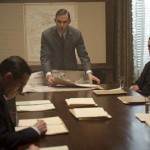 Agent Knox, the amiable agent with the voluminous vocabulary, is making a prolific presentation for Director Hoover and Friends. He’s got graphs and whiteboards and everything, just like Karl Rove bouncing up and down on Fox News, laughing his fat ass off as the country goes down in flames– never mind, wrong opinion column. The others are yuking it up, but Knox and Hoover have their eyes on the prize– Nucky Thompson, Smooth Pimp . They’re taping up their names and photographs like they do on every cop show. You’ve seen them do it; don’t try to tell me you haven’t. Knox says he’s going to find the weakest link in Nucky’s chain, and he’s going to break it. I just wish he hadn’t picked the woobie. 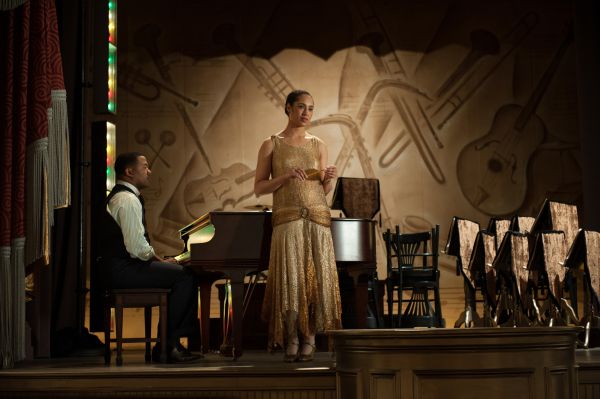 Show us some skin already! Can anybody remember the last sex scene in this show? 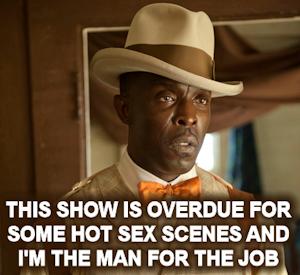 While Chalky checks out what kind of booze he’d like to pour on Daughter Maitland’s behind, Dunn tells him he needs to take off for a couple of days to visit his sick mother.

DUNN: Hey, my momma’s sick, I’m going to take a couple of days off.

Dunn makes a pit stop at Dr. Narcisse’s Universal Negro Improvement Association office. (If you’re wondering what the heck this improvement is, you can learn all about it at that link.) Narcisse says it belongs to a Mr. Garvey, who is fighting deportation, but I think we all know how he got on the deportation train. Narcisse is a smooth operator and he plans it all out.

Dunn has some payola for Narcisse, but Narcisse starts yammering on like the Oracle at Delphi again, and kicks him out. This guy would make a good Wonderland character, like the Caterpillar with a bong, but a bong that belongs to a dick. Dunn catches up with him outside, where Narcisse continues to talk in a riddle, wrapped in an enigma, wrapped in a turd. TL;DR: Chalky sucks. Come work for me. I speak eloquently and I won’t make you do any math. Just beat the hell out of street trash for now so the rest of us can enjoy the view. Dunn is happy to oblige. 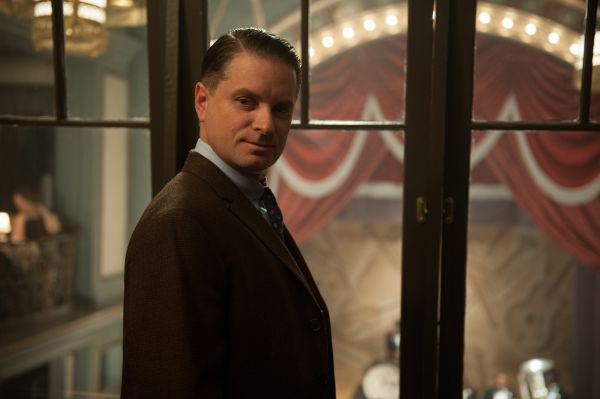 Eli’s Son and The Story That Gives Me The Trots

I cannot completely express my utter contempt for this storyline. We’ve seen it a million times. The family places the weight of the world on a kid’s shoulders because he’s the first in the family to go to college. The kid is brilliant, he’s got a ticket to ride… AND HE DON’T CARE. Do it for us, son! Kid doesn’t want to go, wants to go on unapproved life path. Kid bursts under pressure, does something stupid and blows it. So he gets to be where he wanted, but everyone hates him for the rest of his life because he threw away such a wonderful opportunity.

This is what happened with Jimmy, and it got beaten into our heads with a stick. Now they’re doing it with what’s-his-name, and we have to suffer along with it in real time. After last week’s shenanigans, Willie decides to get back at the kid who pranked him by slipping some home made Ex-Lax into the liquor at a party. The problem is that it’s a lethal mix, and everyone in the dorm finds the kid dead in the bathroom in the wee morning hours. There won’t be any disposing of the body or anything like that. Now we’re going to have to suffer through the agonizing onscreen process of a trial, or Nucky bargaining with the college president, and so on. I hate that we are going through this again.

Show me the money; just don’t lose it! 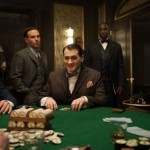 Nucky, who used to be in this show, sends Eddie to make a cash drop off while he proposes a real estate deal to Arnold Rothstein– real estate they can use for booze smuggling. It’s $500,000– Rothstein is hesitant. He decides to mull it over poker– intense poker. Lansky is shown kind of hovering during the game, like he knows Rothstein shouldn’t be playing. They say that in real life, Rothstein needed to play more than he needed to win. Maybe Lansky knew that. Maybe he doesn’t like pie either.

After some obligatory smacktalk, Rothstein asks for a house loan of $250,000, and they bring it right over. Do casinos just keep that kind of stuff lying around? Racks of money as a matter of course? I guess it would be normal for super high roller establishments that don’t attract the kind of clientele of which I’m thinking. I need to think richer I need to think more money, I need to think– Oh, Arnie, you lost! That’s not going to look good. And you didn’t get any pie. Now I thought that this was somehow going to be used as leverage to get him in on the Florida deal, but Lansky goes to Nucky later and claims that he and Lucky Luciano have the $500,000 to buy in if Rothstein doesn’t. Rothstein is going through “a rough patch.” That’s a rough patch? I wish I had his problems.

Eddie delivers the package, but being the ever well-educated, polite man of awesome he is, he takes his business associate for fine dining and fine boozing, because Eddie doesn’t just deliver packages– Eddie is THE package, a class act all the way. They end up at the bar drinking fine German beer and singing fine German songs, and talking about Eddie’s fine German family. One of his sons is a Burgomeister, and–

Wait, what was that?

I said, his son is a Burgomeister, and–

NOOOO!!! Eddie’s son is going to take all our toys! Run for your lives!!! ONLY SANTA CAN SAVE US! I told Nucky to be nicer to him!

Not only is the United States now facing a toy ban, but Eddie just can’t stop talking. He’s bragging about all his duties and his recent promotion, so much that the FBI hears about it on Twitter. At the end of boy’s night out, Agent Knox is there to bring in Nucky’s weakest link. Oh, Eddie. I feel so bad for you! You need a lawyer! Don’t talk until you’ve got a lawyer! And you, Knox– don’t you dare drag us into WW 1.5: TOY WARS. Save the Barbies!!

Van Alden and The Capones 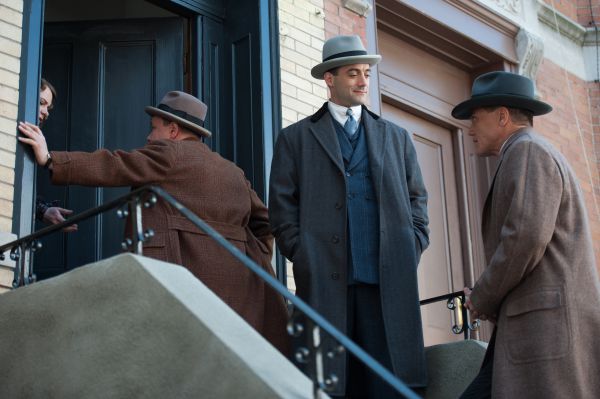 Al Capone sure hangs out with some interesting people. I wouldn’t mind going out for a night of roughhousing with him and his brothers, but that fat, smelly guy he hangs out with– I would have to hose him down. I cannot abide odor. Anyway, Smelly Jake is making his way up a flight of stairs, if you can call it that, and he is not looking well. He’s all sweaty and out of breath– probably smelly, too. He is about to make his collection without incident, but he falls down the stairs and kind of passes out.

I used to sort of like O’Banion until he put that guy’s eye out with his stupid shotgun prank. Now I just want to kill him. Fortunately in a show where anyone can die, I may get my wish pretty soon. I mean, I don’t know what else I expected from a gangster, and I don’t know why that’s any worse than killing someone, but it just is. O’Banion sends Van Alden on a delivery mission with limp daisies for Smelly Jake and the Capones. (The Capones sang backup for a lot of pop stars in that era– Ru Paul, the Big Bopper, Ricky Nelson and many more.)

Well you can go around on a HULK SMASH! meelee with Al Capone, but you better not send him limp daisies, because we all know what THAT means. Fortunately, Al is a jovial man, an understanding man who has not shot Messenger Van Alden– at least, not yet. Instead of shooting Van Alden, like any sane gangster would, Al takes him along with Frank on an all expenses paid Mayhem Extravaganza. Charm the ladies, make a little cash, throw a guy out a window, laugh like you’re tossing a half-man at the local pub. This goes on all day. 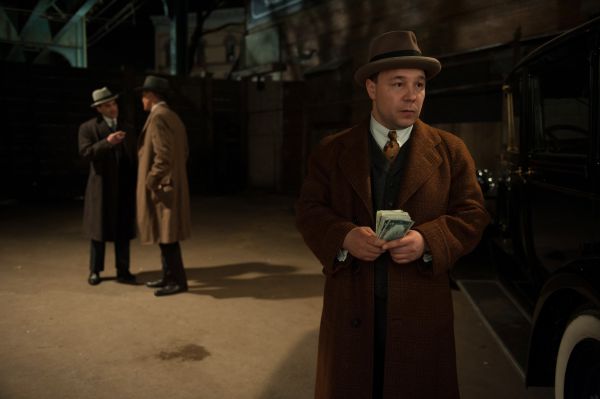 Later the boys get into grand theft auto when they find one of O’Banion’s abandoned flower trucks. I just can’t help but think that Van Alden could give some networking tips to Eddie. This is how a business lunch should go. After hanging out for a few hours, Frank is offering him a job with better hours, more money, a dental plan– and Van Alden has the moxie to hold out for a better deal, to make them beg.

They steal a bread truck hoping it’s full of booze. The ride is hilarious– Al is driving the truck and snorting heroin or cocaine (I can’t tell which) as fast as he can shovel it up his nose with a pocket knife while Van Alden steers. During this whole sequence Al is just having the time of his life. You want to laugh with him– you want to go on a crime spree with this guy because he’s getting high on the act itself; the drugs are just an afterthought.

They hear a noise and they pull over to find the guy O’Banion blinded with his prank. They let the guy run, then shoot him. Al lets his tommygun rip. I think Van Alden just may take that job offer. Taking an eye out is definitely worse than killing someone.