It’s been a long time coming for some Boardwalk Empire fans but the first season is now finally out on DVD and Blu-Ray this morning, January 10.  Here are the special features included in the 5 disc set: 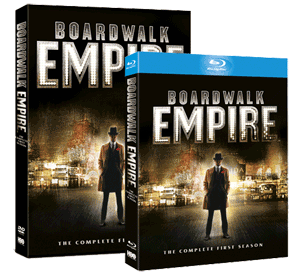 If you’ve already picked up the DVD or blu-ray and have had a chance to watch a couple of these special features please feel free to leave a comment below describing them in more detail!  Hopefully these discs will tide you over until this Fall when Boardwalk Empire season 3 premieres on HBO.

Head to Amazon, HBO.com or your favorite media retailer to order!