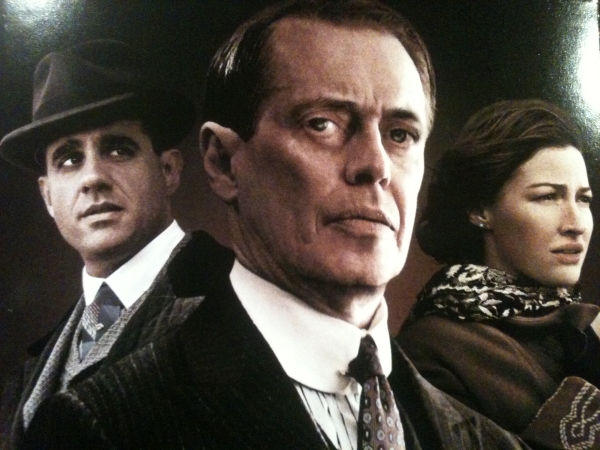 Season 4 of the highly acclaimed and award winning series ‘Boardwalk Empire’ premiers September 8th. In the mean time, catch up with Nucky Thompson and the rest of the ‘Boardwalk’ cast by ordering[amazon_link id=”B009LDD590″ target=”_blank” container=”” container_class=”” ] ‘Boardwalk Empire’ The Complete Third Season on BluRay/DVD.[/amazon_link] Take a step back into The Roaring ’20s – a time of prohibition, power, opportunity, fortune and war.

Season 3 picks up 14 months after the season 2 finale. Jimmy is dead, Eli has gone to jail and Margaret has sold Nucky’s precious land. Under assault from shaky political alliances in Washington, Nucky is forced to drift even further from the spotlight, proclaiming Arnold Rothstein of New York as his sole buyer. Nucky’s solution is another man’s problem – Gyp Rosetti, a notorious hot-head under the protection of Joe Masseria, blockades a key strategic passage into New York at Tabor Heights. Nucky’s world slowly unravels throughout the season – Attorney General Harry Daugherty is under threat of inditement, Gyp Rosetti has cut off business with New York, and his relationship with Margaret has all but deteriorated. Chaos has broken out in Atlantic City, putting Nucky’s life and livelihood on the line like we’ve never seen before. Relive some of the greatest moments of season 3 alongside great characters like Richard Harrow, Margaret Thompson, Gillian Darmody, Al Capone, Owen Slater, Chalky White, Nelson Van Alden, Charlie Luciano and the rest of the ‘Boardwalk’ cast in what has been the most exhilarating and daring season of the ‘Boardwalk Empire’ saga. 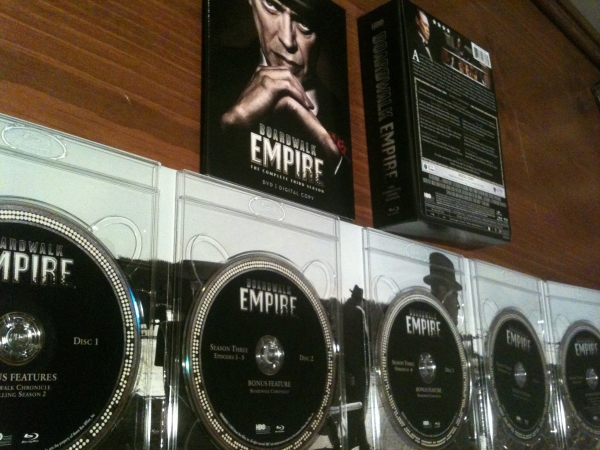 AMERICAN EMPIRES – Prohibition did little to quench the country’s thirst for alcohol, and proved to be a boon to the era’s gangsters. Learn more about these gangsters, their influence, and their systems of distribution in this interactive compendium.

BOARDWALK CHRONICLE – Track the major players and locations within each episode, and learn more about the historical threads woven into the season three storyline with this interactive, in-feature guide.

NEWSREELS – Explore some of the real-world events and historical figures that inspired ‘Boardwalk Empire’ season three with these 24 exclusive featurettes.

BOARDWALK EMPIRE – DIRECTOR’S CHAIR – Hear directors Tim Van Patten and Allen Coulter break down key scenes as well as how they approach taking the series from the script to the screen.

SCORSESE ON SEASON 3 – Award-winning Director and Executive Producer Martin Scorsese provides a unique and detailed perspective on the third season of ‘Boardwalk Empire.’

Here’s a a recap of the season if you’re in need:

‘Boardwalk Empire’ has put out another great season with awesome bonus features, both recycled and new. For those of you who have purchased a season of ‘Boardwalk Empire’ in the past, you can expect similar character dossiers and introductions, audio commentaries, previous season overviews along with another trip down to historic Atlantic City. Somehow, Winter and the production team always manage to keep the material fresh, despite having striking similarities to previous season packages. My personal favorite add on this year is Newsreels, archived events and people who inspired some of the great characters and scenes of season 3. Learn how Gyp Rosetti came to life as a montage of past gangsters, or uncover the truth behind gruesome gang-related massacres. From there, check out the Director’s Chair, where Van Patten and Coulter share their vision and dive into crucial turning points in the season. Again, much of the bonus feature material is recycled from past seasons, but somehow I’m still captivated. The universe and history of 1920’s America is as rich and unique as the characters themselves.

So what are you waiting for?[amazon_link id=”B009LDD590″ target=”_blank” container=”” container_class=”” ] Order a copy of ‘Boardwalk Empire’ The Complete Third Season on BluRay/DVD today.[/amazon_link] (available 8/20/13)  You won’t be disappointed.