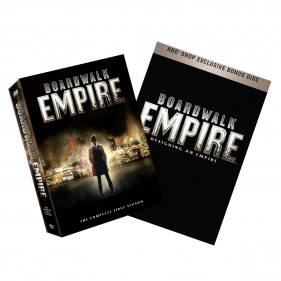 Fans have been waiting for over a year to purchase HBO’s Boardwalk Empire on DVD and Blu-Ray.  Today HBO has announced a pre-order for the entire first season DVD/Blu-ray box set!  Available on January 10th, you might want to consider saving those holiday gift cards for a copy of one of HBO’s most successful programs.  When we get more details on the special features we’ll give them to you but for now HBO is promising a free ‘Designing the Empire’ bonus disc to anyone who pre-orders from the official website. Now if it only came with a shot glass and some bathtub gin, this set would be ready to go.

We also have a new promotional video for Boardwalk Empire on DVD and Blu-Ray hot of the HBO presses: