When it aired on April 21, 2019, the second episode of Game of Thrones Season Eight stood out to me. For the first time in a long while, Game of Thrones‘ narrative effectively foregrounded the mundane yet deeply rewarding moments of “everyday life.” As the inhabitants of Winterfell brace for the Long Night, they also work to rebuild the sense of comfort and trust that has been systematically destroyed by the turmoil of previous seasons. Likewise, as Winterfell, the archetypal “home,” comes under threat once more, it is vitally important to reaffirm the essential role of domestic life in the face of humanity’s potential destruction. For many characters, bubbling pots of simple, sustaining broth serve to deconstruct the show’s previous themes of isolation, decadence, and deprivation.

I am a worrier by nature, and over the years I developed the questionable hobby of worrying about fictional characters. Endlessly. This came to a head at some point in 2016 when I found myself randomly musing “Is Theon Greyjoy getting enough Vitamin C? Is he eating well?” Given that the man in question had just emerged from two years of rough living as a political prisoner and was now on an ambiguously provisioned boat in the middle of the ocean, this quibbling concern wasn’t quite as absurd as it sounds. But HBO’s Game of Thrones never did much to alleviate my worries. While we see Theon noshing on all sorts of feasts with the Starks in Season One and maniacally chomping on an apple in Season Two, five seasons follow in which he consumes nothing of substance. 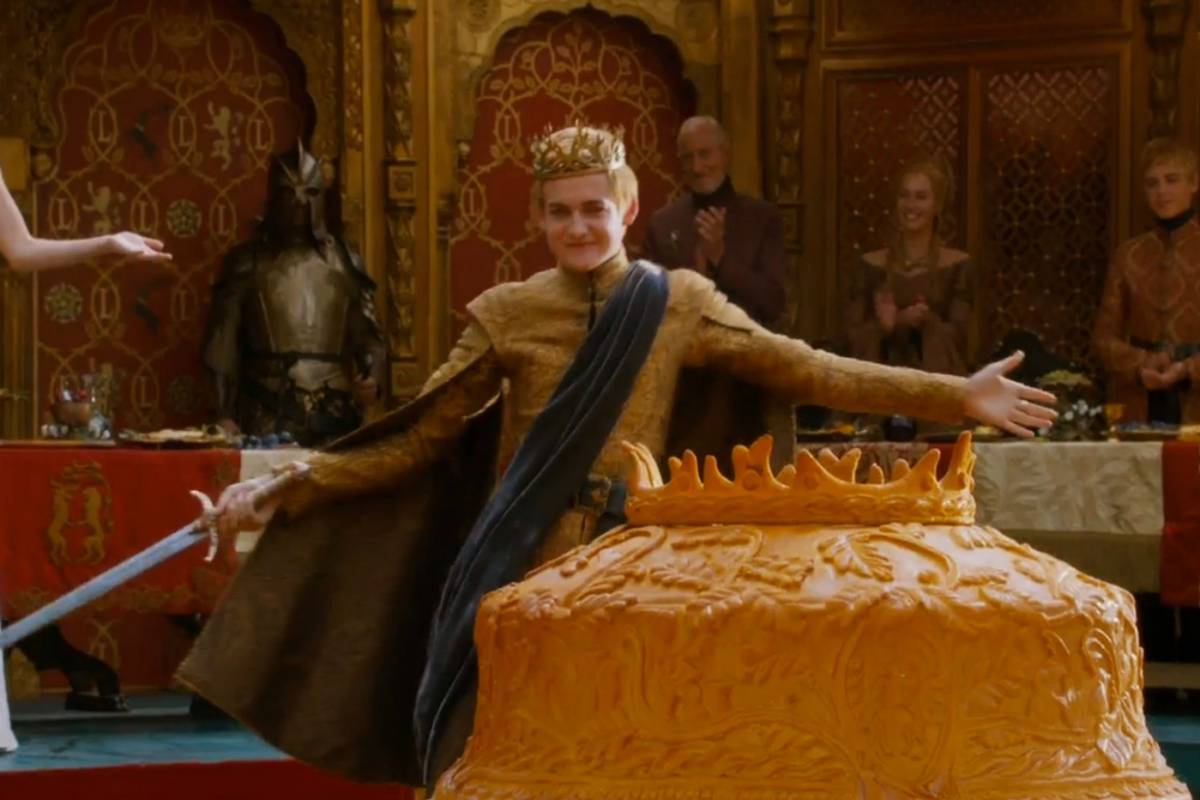 Perhaps this was for the best. Food is rarely nourishing in Westeros. Instead, pies are stuffed with Freys or work to block the throats of kings; the contents of soup pots are splashed away to accommodate molten murder; bread and salt herald betrayal rather than welcome. The show’s subtle but persistent defamiliarization of comfort and food helps to establish Westeros’ devolution into a relentlessly treacherous environment. Characters cannot even let down their guard to eat. Moreover, just as Game of Thrones tracks the crumbling of Westeros’ noble houses, to undermine basic traditions of order, satiation, and community is to undermine that which bolsters the basic structure of family.

Nevertheless, if you want to create an immersive series that is populated with realistic characters it’s not enough for them to grimly march from plot point to plot point. Invested viewers need to know what sustains their favorite characters on the march? To implicitly remind audiences that there is nothing to be sustained, that characters are fueled by dry ink and whatever an actor had for lunch that day is to leave the fourth wall in an unseemly pile of rubble. When watching Game of Thrones, I always enjoyed feasting my eyes on the lavish wedding luncheons, glistening lemon cakes, steaming bowls of broth, and brimming cups of wine. More importantly, however, from the moment Arya lobbed a spoonful of stew at her prim sister in Season One, I appreciated the unique moments of tension, dysfunction, and bonding that the dinner table so often sets the stage for.

A Song of Ice and Fire author George R.R. Martin’s attentive dedication to detailing Westeros’ alimentary offerings has become a bit of a joke. Do we really need a bloated description of every course in every feast? Does it matter that Ironborn dinners are sordid affairs, featuring unspiced goat, black bread and a remarkably passable onion pie? Likewise, must we be privy to the ins and outs of eating live rats (#respecthtehustle)? The answer, I have learned after having spent the last year in the throes of a curious obsession with a bowl of soup, is unequivocally yes.

In the later seasons of the show, Game of Thrones‘ show-runners and by extension, the hungry denizens of Westeros, were pressed for time as they raced towards the Season Eight finale. The camera no longer lingered on sagging trestle tables or covert picnics in the woods.  Nevertheless, in Season Six and Seven, Theon Greyjoy has two separate scenes in which, despite consuming not a crumb, he is caught up in a heady mixture of familial antagonism and alcohol. The show’s thesis, when it came to Theon, always seemed to be that a difficult and thankless life is not worth sustaining so one might as well drown one’s sorrows and wait glumly for the end. In contrast to this troubling lack of appetite, while Tyrion spends much of Martin’s A Dance with Dragons cultivating a case of serious alcoholism, hefty portions of the chapters from Theon’s perspective while imprisoned by the nefarious Boltons, are devoted to what he is eating and what others are eating. When adapting Martin’s books for television, the showrunners failed to recognize the persistent, hungry ambition that colors Theon’s character in every chapter. He wants to live.

After seasons of culinary angst on my part, imagine my joy when “A Knight of the Seven Kingdoms” depicted—for a whopping three seconds!—Theon Greyjoy enjoying a lovely bowl of soup. Despite its brevity, audiences were captivated by the moment. It took one glimpse of the Greyjoy prince spooning up soup with his partner in survival, evasion, and escape Sansa Stark to spawn a veritable tidal wave of Internet discourse suggesting that the pair were in love. This incredibly brief acknowledgement of emotional and physical hunger allowed audiences to envision—for one fateful week— a future for Theon that involved love and fulfillment and most importantly something other than an early death.

The moment was short-lived. After their marked inattention to detailing Theon’s dogged desire to thrive, it came as an ironic but not unexpected blow that when the showrunners finally chose to portray him sustaining himself it was only so that Theon could go to his death. But when it came, Theon’s death felt all the more real because of the previous episode’s culinary detour. It was the sort of “bittersweet” ending to Theon’s character arc that George R.R. Martin has always promised.

When I think back to the things that I enjoyed most about Game of Thrones’ eight-year run, it’s not the big battles or Emmy-winning monologues that first come to mind. Instead, I cherish the little things that made Westeros and its inhabitants so tangible and compelling—the unevenly embroidered bits of brocade, the nickering horses, the feasts, and cakes, and bowls of soup.