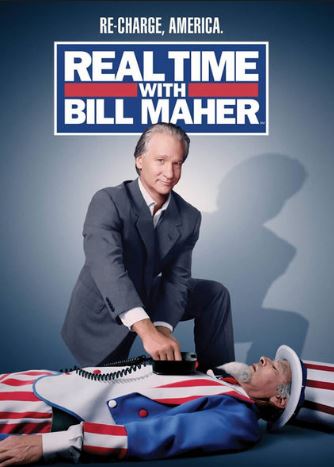 We are all quite familiar that Bill Maher likes to rant on his political bent. He has done so now into his fourteenth season of REAL TIME WITH BILL MAHER. He ups the ante this year, but not with a traditional stand-up routine, as he has done on occasion. This year he is creating special shows timed with both the Republican and Democratic conventions. Oh, Boy!  Essentially, he will be reporting live for the East Coast after each night of the televised conventions being held in Cleveland, Ohio and Philadelphia Pennsylvania, respectively. What follows is the detailed Press Release regarding the specials.

REPUBLICAN AND DEMOCRATIC CONVENTIONS IN FOUR

LOS ANGELES, June 15, 2016 – REAL TIME WITH BILL MAHER intensifies its election coverage next month with special shows during the Republican and Democratic conventions. Four live half-hour editions of the show will be presented from Los Angeles, reporting on the Republican convention on Wednesday, July 20 and Thursday, July 21, and the Democratic convention on Wednesday, July 27 and Thursday, July 28 at 11:00pm each night. Maher will be giving a rapid response to that evening’s events, and each show will also feature three in-studio panel guests.

REAL TIME’s regularly scheduled programming will continue to air on Friday of both weeks at 10:00pm. Additional information to be announced as it is confirmed. Now in its 14th season, REAL TIME WITH BILL MAHER features his unique perspective on contemporary issues, and includes an opening monologue, roundtable discussions with panelists, and interviews with guests. The show has already been renewed for a 15th season of 35 editions, scheduled for 2017. Politico has hailed Maher as “a pugnacious debater and a healthy corrective to the claptrap of cable news,” while Variety noted, “There may not be a more eclectic guest list on all of television.”

Who would have thought HBO would be the place to recap of all those crazy proceedings? Well, with Bill Maher in the house it seems an obvious choice or at least until daily VICE News is in place on the network. Now you are given a whole new reason to mark the convention dates on your must-see list.