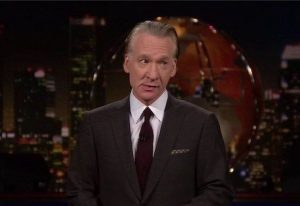 BILL MAHER: TRIGGERED is set to be the HBO comedian’s eleventh solo special for the network. The standup gig will be filmed live on July 07, 2018, a Saturday night, from Tulsa Oklahoma. Well, why Tulsa you ask? We don’t know but since Washington D. C. was the site of his last stint in 2014 Tulsa seems as good a place as any.

And as you can imagine Bill Maher is triggered to go off about a wide range of topics, especially those centered around President Trump. You can watch him weekly for that, but for the upcoming HBO Special, you can be sure he’ll ratchet it up a notch. About the event, he is quoted as saying – “The paradox of my life is, the more horrifying the country under Trump becomes, the more fun we have at my stand-up shows. I guess it’s a release, or whistling past the graveyard, or a primal scream. They want me to be mean and I am. Half of this show is about Trump, but I am determined to make half of it about me – my way of saying, ‘Trump, you don’t get to win!’” The special is executive produced by Maher, Beth McCarthy-Miller, Marc Gurvitz and Neal Marshall, and will be directed by McCarthy-Miller.

While we got you attention about Maher we can also add that his 16th season is still going strong Friday nights at 10:00pm. As of this writing, the latest episode just aired on 05.11. The guests were California Republican Congressman Duncan Hunter as the top-of-show guest; actor Ethan Hawke as the mid-show interview guest and at the roundtable were former United States Secretary of Labor and professor at University of California, Berkeley, author Robert Reich, and activist and rapper Michael Render (aka Killer Mike).

Here is Bill Maher and his latest monologue once again proving how easily he is triggered to go off. HBOWatch will remind you of his special as it gets closer. Bill Maher, only on HBO!