Madeline wakes up from a dream that shows a man popping the cork off a champagne bottle, a woman walking barefoot on the beach in an unzipped dress, a quick shot of sex, and the closing of a door. This dream may mean something eventually, but from any information we have gotten from the first episode, we don’t know yet what that is. Madeline spends the morning staring out into the ocean until she is startled by Chloe. She then talks about what could be out there and what may lie beneath the surface. I wasn’t a fan of Madeline in the first episode and after seeing the second ep 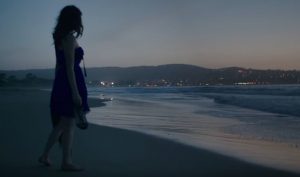 isode, I can’t say I’m a fan now, but this episode seemed to give her more depth and made her seem more human than the perfect image that she was trying to sell incredibly hard. I couldn’t help thinking that when she hinted about what could be beneath the surface of the water, that part of it eluded that there’s much more to her than what she portrayed.

Then again, it may have been just creating an opening for Chloe to ask about monsters. The word “monster” will be uttered again in the episode and probably even in later episodes as well.

Ziggy tells his mother, Jane, how he doesn’t want to go to school and who can blame him? The first time he went, he was accused of strangling Amabella in front of his entire class and their parents. Jane’s response is one of the big little lies that she feels like she has to tell him in order for him to get through his day and the days to follow: “You know you didn’t and I know you didn’t and it’s good enough for me. It should be good enough for you. It’s going to be good enough for everyone else too.” Let me clarify here. I’m not saying that the lie was whether or not Ziggy strangled anyone. I’m still on the fence about it because it feels like the writers are waving a giant red herring in front of my face and expecting me to bite. I don’t think we’ll find out what actually happened for a couple of episodes more. The lie that Jane told that she knows is a lie is that “it’s going to be good enough for everyone else”. Guilty or not, the stain on his reputation is not going to wash away that easy. Parents sometimes have to lie to their kids in order to help them get through life. Jane knows it’s not going to be easy for her son to show up to school each day and it’s not easy for her either. Even if she was not a single mother, that situation alone is tough. Getting through it takes some Serious Mothering.

Madeline gets upset that her show may be getting canceled which is another of many battles that she feels she has to fight. Chloe also uses her phone to turn down the music because her mother is on the phone. Over the course of the previous episode and this one, we see how this first grader has control over the music her family listens to.

Celeste and Perry have an exchange on the way to drop the kids at school that goes from uncomfortable to dysfunctional. It doesn’t take long for him to show his overbearing side.

The quick mention of invitations during the present day interviews seemed completely out of place and confusing. It wasn’t until I watched the scene previous to this a few times that actually saw that the invitations were being given out. It felt jarring going from that to a scene where Madeline is trying to convince Celeste to help with the fight to make sure her show gets performed. If there’s one problem I have with this show, it would be with some choices made over editing or transitions. Luckily, they are out shadowed by what’s good about the show like the characters are how they interact with each other.

Celeste draws Madeline’s attention to the fact that Nathan and Bonnie are attending the same class. Madeline goes from giving attitude to the yoga instructor to a quieter, reserved tone when Nathan and Bonnie enter. She has no problem giving anyone a piece of her mind, but she will only talk about this couple behind their back.

The scene that introduces Harry the Hippo, while short seemed to the raise some questions. After what happened in the first episode, I wondered if something was going to happen to this ten-year-old stuffed animal with the blame being placed on Ziggy. When Amabella asked if Harry liked to be hugged and then glared at Ziggy, it seemed suspicious. Was this foreshadowing or did something already happen? It seems very deliberate that we see very little of the kids interacting with each other, but one of the main questions that have come up so far revolves around an incident that happened between them.

Perry’s asshole level gets turned up to High when he hits Celeste because he “feels he’s missing out” on his family’s life because of the traveling he does. Somehow, this makes the rough quickie they have seem even more disturbing. Maybe it’s the thought that, in his mind, it validates his actions. At this point, we’re about 70 minutes into the series and we don’t know who is murdered. I want it to be Perry, but I don’t think we’re going to be that lucky. 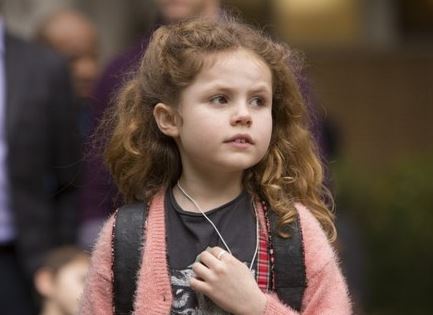 Madeline brags about how “full-time mommy status” can be lorded over the career moms. Sorry, Maddy, I think Jane’s got you beat with her “single mommy status”. She may even get bonus points for being a mother to a son instead of a daughter. Honestly, I don’t understand how her mentality works. It seems ridiculous either way.

Eight minutes after the invitations were mentioned in the episode, it becomes obvious what happened at the start of the school day: Ziggy was not invited to Amabella’s party. I’m not asking that it be spelled out, but the initial invitation thing could have been clearer. Instead, we saw it at a distance from Jane’s car window. Once again, Chloe starts up the music to distract from the awkward moment.

Earlier, we had a peek into Madeline’s closet with her weakness to Nathan and Bonnie. The closet swings open when it is revealed that Nathan is her ex-husband from 15 years ago and it’s still affecting her to the point that Ed believes that it’s hurting their marriage. He asks Madeline if Nathan is her “the one” and then answers for her that Nathan is her “one” while Madeline is Ed’s “one”. While I feel for Ed having to deal with the thought that his wife is mentally outside the marriage, his logic is flawed. If you believe your “one” has a “one” that is someone other than you then it breaks the idea that there is a “one” for everyone.

Madeline confronts Renata about not inviting Ziggy to Amabella’s birthday party, but in Maddy’s regular style, she goes one step further to use Chloe as a status tool. “If Chloe doesn’t go, the brigade will follow”. When Ed calls her out on it, she denies using her daughter to fight a battle.

Another battle that she fights shortly after is the issue over Bonnie taking Abigail to Planned Parenthood. It seems she has no problem confronting Bonnie when Nathan is around.

Nathan meets with Ed about it and it quickly escalates when mentions how Ed is “Mr. Sensitive”. If a meeting between the current husband and ex-husband wasn’t awkward enough, Ed’s insecurity coupled with society’s pressure on him to be a tough, insensitive bread-winners turns the calm discussion into threats.

There was a nonconsensual kiss between Ziggy and Amabella. We find that Chloe helped orchestrate it (pun intended) by doing what she usually does, start the music. Of course, this adds to the bad blood that already exists, but it also is a bit suspicious because Amabella asked earlier in the episode if Harry the Hippo consented to hugs.

After two episodes, I can’t help wondering how this will all lead to someone’s death, whose death it is, are the interview scenes going to be relevant, and will it lead to a big payoff? It’s been an entertaining show so far. How long will we wait until we find out more about the death that was mentioned in the beginning? I wouldn’t be surprised if we don’t find out until the finale, but will it be worth it?

What are your thoughts as we await Episode 3?