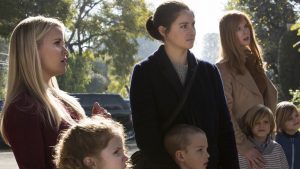 The Winter 2017 schedule is filling up. The limited series BIG LITTLE LIES has now carved out a seven-week spot alongside GIRLS and CRASHING in February and THE YOUNG POPE in January. Though there is not an episode breakdown at this point there is an official full-length trailer for the Kidman/Witherspoon project debuting February 19.

Based on Liane Moriarty’s best-selling book of the same name, this subversive, darkly comedic drama tells the tale of three mothers of first-graders whose seemingly perfect lives unravel to the point of murder.

And some brief thoughts. This quickly sets up to be a deliciously witty cat fight. The claws are bared by all the gals here. Who comes out on top of it all after the big scrap plays out is the question. Of course, people who have read the Moriarty tome know the answer to that. It is set in beautiful Monterey which is really just like any other place out there; there is an undesirable underbelly there as well. Just a little play box for these cats to prowl all the while keeping up appearances…for the most part.

The characters played by Reese W., Nicole K., Shailene W. and Laura D. all  have their troubles, demons and boy-toys to deal with it seems. Starting 02.19 it will all unspool before us. Man, it must be a big pile of BIG LITTLE LIES. Stay tuned.