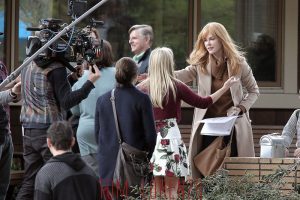 We announced the news that BIG LITTLE LIES was optioned by HBO back in May of 2015 and ever since then the work, based on the novel by Liane Moriarty, has been shaping up nicely. We announced the green light to series in November of last year and learned that it would be a seven-episode limited series. In December we told you that the director, Marc Vallee, was directing all seven episodes which would ensure one even, cohesive narrative. In January of these year we happily reported that Alexander Skarsgard would join the likes of Reese Witherspoon, Laura Dern & Nicole Kidman in the work.

All was looking good even with an occasional on-location pic surfacing (like the one at right.) Then out of the blue this teaser dropped and so did our jaws I think. It seems a bit hot and steamy, to be sure, we a touch of violence, mystery and angst thrown in. If you haven’t read the book you just don’t know what a tangled mess these ladies will get involved in, but they must include a big accumulation of little lies. We were, of course, expecting a new trailer to surface, but I think we were expecting to get a glimpse of THE LEFTOVERS instead. Nevertheless, what we got did not disappoint. Nevertheless, what we got did not disappoint. The talent was evident and the tone of BIG LITTLE LIES was clearly illustrated in the clip. Check it out for yourself if you missed it.

Couple this limited series with THE YOUNG POPE and the return of THE LEFTOVERS and 2017 looks like it is starting strong. What do you think? Have you read the source material of the same name? Does this tease set to the sounds of The Temptations whet your appetite for the drama that is heading our way? Look for BIG LITTLE LIES in 2017.