We’ve had Carrie Bradshaw & company, Hannah Horvath & friends and Issa Dee & BFs, but we never had a female troupe quite like the gals of BETTY. There is Kirt, Janay, Honeybear, Camille and Indigo and they are having a blast in NYC. But what about the title character, you ask? Who is Betty? Well, as will be explained in the clips provided here, they are all BETTY and that is what gets us into the story. “Betty” is an urban street term for female skateboarders, but it started as a derogatory term back ‘in the day’ and here is a term of empowerment. The series is about the gals just wanting to do their thing in the ‘boarding scene dominated by males. We watch them do their pops, ollies & grinds down the streets of the urban canyons and the skate parks along the way, as long as the boys give them room.

As we’ve already reported the series is based on a film called Skate Kitchen, starring actors repeating their roles for this series, by Crystal Moselle. She gets the camera between the cars as the gals take to the streets and right into the heart of the neighborhoods. These Bettys love their playground as I think the trailer points out

This little pack of young Betties are real Betties who became actors for these roles so what they give us are their raw energy, street savvy and street talk. In fact, if you have trouble with the urban banter going on, remember HBO’s sites offer subtitles. I don’t think the lingo distracts at all, it adds richness to the show. The premiere, and I’ll assume the whole series, don’t drive too hard with deep storyline. This isn’t THE DEUCE. Sometimes the camera just focuses in on the stunt work the ‘boarders are trickin’. It’s all good. It all draws us in like it evidently drew in Moselle. Here is what she has to say.

So, here is how we are introduced to the scene and the gals. Kirt (Nina Moran) is ‘pumping down the street making her way to a local skate park to meet up with Janay (Ardelia “Dede” Lovelace). They organized and poorly promoted a meet & greet for female ‘boarders. Honeybear (Moonbear) shows interest and a party of three is formed. Camille (Rachelle Vinberg) is hanging in the park but is settled in with the boys but finally takes a shine to the feminine presence there. Here is where we first hear derogatory smack from the male crowd. After some fun times in the park, the gals decide to hit a convenience store for snacks and Camille and her male friend Phillip (Raekwon Haynes) tag along. While at the store Phillip starts to berate Camille for leaving her backpack at the park. It holds some of his stuff along with her phone. They all head back to the park to discover it stolen. Using a ‘find your phone’ app they start to track it sown. Good luck with that in NYC, right? 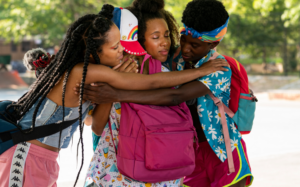 Half the party gives up the search when they run into Farouk (Reza Nader) He is a street hustler & petty dope dealer. They all climb into his van to have a strong toke or two. Except for Janay who sticks with Camille in the search for the backpack. With Farouk is Indigo (Ajani Russell), his apprentice. Kirt is out to teach her how to skateboard and they toy with that in between hits. Meanwhile, Janay & Camille are on a wild goose chase following the ping of the app. A nice fun scene of these two including an encounter with an old man. Janay is one kind young lady it seems.

It isn’t until Honeybear, a shutterbug, realizes that she took a pic of the thief that they link up with Janay & Camille and find the punk. The payoff, they hope, for finding it is to use Philip’s key pass to an exclusive indoor rink. Philip & Camille get free passage into the key party but Camille’s hands are tied and can’t get passage in for her newfound friends. Ouch.

Don’t take my word for it all. Catch the series premiere of BETTY for yourself and meet the latest posse of girlfriends on out on the street. BETTY airs Friday nights at 11:00pm. Plus, stay with us as we chat up about them again next week.