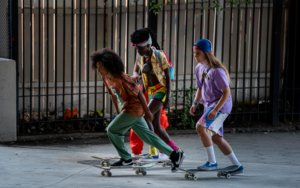 Even though this series takes place in the hustle and bustle of inner-city hangouts this series moves slow. There are not a lot of plot points to get across to the viewer in each episode I’ve found. I mean, ten minutes into this half-hour and we’ve got a montage of skateboard action and near the episode’s end, we’ve got another moment of the same. It all certainly illustrates the episode’s title reference – it showcases the Zen of ‘boarding, for sure.  But it also proves this series is more style than substance.

Looking at the substance, this is what we got. We have gals chillin’ but not fitting in so well. It starts with Honeybear. We learn a bit of backstory on her, as we find she lives in an apartment with her Dad & Grandma and needs to take the ferry to get to where the action is with her friends. She’s not fitting in because she is so shy. Once again, the gals find themselves at the underpass skate park. Kirt & Indigo are there. Indigo lacks a bit of confidence as she is embarrassed to be there because she is not good on a board and Kirt is the opposite. She is brash, big and highly emotive in her own style and doesn’t play subtlety well at all. They don’t quite fit in either, especially in the male-dominated skate 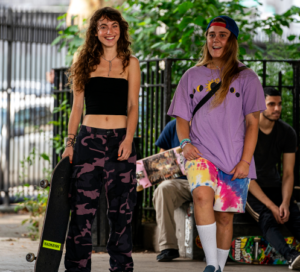 scene. Janay is present too, but she is into her own little drama going down. She seems the most together with the Betties, but not today. Lastly, there is Camille. She is hanging with the boys but doesn’t really fit in as she seems just to token chick to make fun of and yet she is still there. She isn’t hangin’ with the gals because she dissed them at the end of the day last time out. They all need a Zen moment on their boards to clear their heads and they get it.

Some new players get more screen time in this episode. Ash (Katerina Tannenbaum, pictured with Nina Moran’s Kirt) is introduced to Honeybear by Kirt. It seems Ash is interested in Honeybear, but Honeybear can’t take that in right now. Camille has turned on to have an interest also. She has an interest in one of the top dogs in the male posse. He goes by Bambi (Edmund Donovan, pictured left with Vinberg’s Camille). He is a jokester, so when Camille has an opportunity, back at his place, to ask about his nickname we 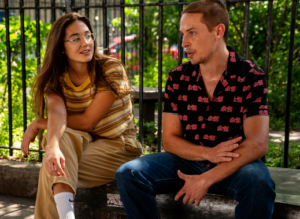 never get a straight answer, but it is a fun scene between them. Is his story that it is in reference to the Disney deer because he lost his Mom true? Perhaps, but we just don’t know for sure. We’ll see where that relationship goes, but for now, it seems to have started off well.

We get more background on Janay as we find her making a regular YouTube show with Donald (Caleb Eberhardt). She finds out through Honeybear that Donald is in a potentially serious mess with a harassment claim against him that sends Janay reelin. He didn’t confide in her about it just blocked the comment section of their vlog so she wouldn’t see the backlash. By episode’s end, she does confront him about it all. I suspect they will take the season to work through it. There is another confrontation in the episode when Indio accidentally body-slams a guy at the park. His pride bruised he rants at her to scare her back, that is until Kirt steps in and stands toe-to-toe with the guy. It all scares Indigo enough to say she’s done with the skateboard.

We end with another Zen moment on the boards as Kirt, Honeybear & Indigo slip into the chained park for a late-night whirl. Indigo has calmed down from the violent tiff to give it another try and Honeybear confesses that she is interested in Ash but will move forward on her terms. And so, another day for the Betties comes to a close.